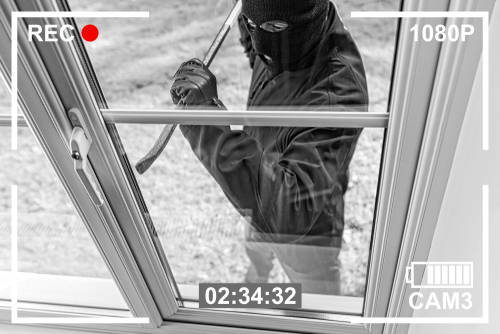 A brazen robbery at a Bronx jewelry store was caught on camera Friday afternoon around 2:30pm.  Authorities are asking for witnesses to step forward to give more information to this pending investigation.

Four masked men broke into a jewelry store in the Bronx on that day, taking millions of dollars worth of merchandise.

Surveillance video shows one of the suspects acting coolly as he approaches the store and waits to be let in. The man was let into Rocco’s Jewelry store after being buzzed in. He then held the doorway open, and three masked men came running in.

The surveillance images shows the man dressed in a white tee-shirt allowing the thieves inside. A 45-second robbery then ensued, during which $2 million worth of goods are stolen.

The suspects used a hammer to smash display cases and stuff trays of high-end diamond jewelry into a bag. The men then fled on foot with the jewelry, and the NYPD is investigating the robbery.

Witnesses tell CBS2 the banging was so loud, they thought they were hearing gunshots. The individuals who were involved in the jewelry heist were all wearing dark clothing, face masks, and gloves.

For additional details on this story, check out the news outlets listed below to stay in the know.