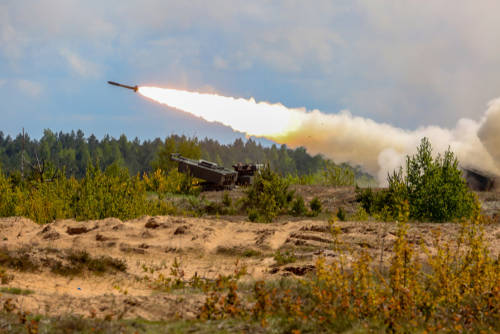 Kyiv is pressing on with its counteroffensive to recapture seized territory in Lyman, an occupied town in the northeast.
From positions east and west of town, Ukrainian forces are crossing the Siverskyi Donets river and crossing the Oskil river east of Lyman as part of a counter-offensive.
According to the British Defense Ministry, Ukraine has increased its offensive operations in the northeast over the past few days. Following their last advance earlier in the month, the units advanced on at least two axes east from the Oskil and Siverskyy Donets rivers.
According to Mike Martin, a fellow at King’s College London’s Department of War Studies, Ukrainian forces may capture Russian forces in Lyman one day.
“Drive flanks north and east of Lyman, causing the Russians to reinforce this critical railroad junction,” he tweeted. “Then drive a much bigger encircling movement to trap the whole lot.”
The move follows Ukraine’s successful lightning counteroffensive earlier this month when large areas of its territory were recaptured from Russia.
The Ukrainian forces are claiming to have taken back more than 3,000 square miles in less than two weeks, recapturing towns and cities while cutting off the supply lines of the Russians.
In response, Putin announced a partial military mobilization of up to 300,000 citizens while Russian-installed officials held sham referendums on joining Russia in Donetsk, Luhansk, Zaporizhzhia, and Kherson.
According to Russia’s state-owned RIA Novosti, the reported results included 99.23 percent in favor in Donetsk and 98.42 percent in favor in Luhansk, two areas partially controlled by pro-Moscow separatists since 2014, as well as 93.11 percent in favor in Zaporizhzhia and 87.05 percent in favor in Kherson.
For more on this story, please consider these sources: