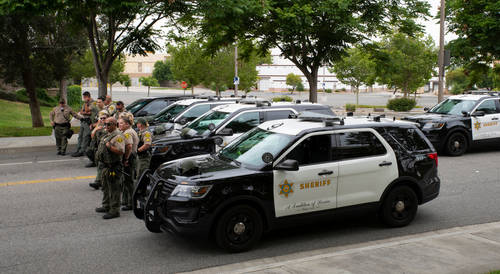 A pair of Georgia sheriff’s deputies fatally shot while serving an arrest warrant were identified on Friday.

The Cobb County Sheriff’s Office reported that Marshall Ervin, Jr. and Jonathan Koleski were killed Thursday while arresting a suspect wanted for theft.

Chris Cook and Christopher Golden were arrested after nearly four hours of standoff with law enforcement. There were two charges of aggravated assault on an officer and murder against Cook, and two charges of theft against Golden.

Cobb County Sheriff Craig Owens said at a press conference that they were outstanding men, men of character and integrity. They were men who were loved by their families and kids.

There is mourning among the sheriff’s office and the victims’ families.

“Our hearts are broken here in Cobb County,” the sheriff said. “It’s a night of heartache for two families, two wives who have lost amazing husbands.”

At approximately 7:45 p.m. Thursday, deputies were serving a warrant at the address when an ambush occurred.

According to Owens, the deputies knocked on the door and rang the doorbell without getting an answer. An individual drove up to the officers’ patrol car and opened fire as they returned to get into it.

At the time of the shooting, it’s unclear if both suspects were in the vehicle.

Deputies alerted dispatchers to the shooting, the sheriff said.

In the end, Cook and Golden were taken into custody following a standoff between law enforcement and the suspects.

According to Owens, Republican Gov. Brian Kemp called him personally to offer him state resources.
For more on this story, please consider these sources: