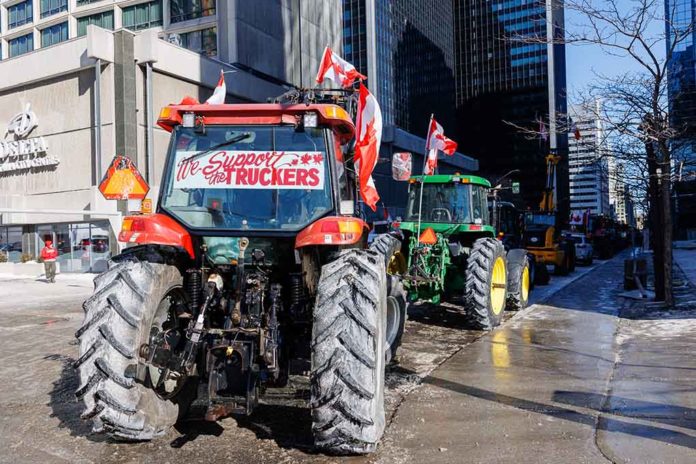 (InformingNews.com) – The Freedom Convoy in Canada is making a lot of waves, but it’s meeting resistance. The government is fighting back, placing restrictions on the group that could lead to its downfall and targeting Americans who are not even in the country.

The Convoy Moves In

On January 28, a convoy came into town in Ottawa, Canada. The trucker-based group was there to protest COVID-19 mandates. They rolled by protestors gathered in the streets and led in a passenger vehicle convoy that took over multiple blocks in Toronto, bringing the city to a halt.

Locals and government officials have been vocal about not wanting the protestors there. Authorities have taken many steps to try to get them to go away.

The latest move by the Canadian government is the announcement it will look into people who donated to the Freedom Convoy’s GoFundMe campaign. On February 7, officials said they were looking to take legal action against those who contributed to the fundraiser. They claim they will look into the reasoning behind donations, and if they find people donated with the intention of threatening the security of Ottawa, they will pursue criminal charges.

More Actions Against the Convoy

The move to go after American donors wasn’t the first step the government took against the protestors. On February 6, Mayor Jim Watson declared a state of emergency in Ottawa due to the protests. Law enforcement has been issuing a high number of tickets to protestors for various infractions. They also removed access to fuel supplies and threatened legal action against anyone aiding the group.

One of the tools protestors had been using to garner attention was honking the horns in trucks and other vehicles, but Superior Court Justice Hugh McLean issued an injunction on February 7 against them to ban honking. It will last for 10 days, until the court can hear more of the lawsuit filed by area residents against the convoy for disruption of the peace.

After almost two weeks of protests and multiple attempts to silence them, the group has received support from across the world. Former President Donald Trump and other Republican leaders in the United States have backed them. Within Canada, the federal Conservative Party mostly stands with the group.

The convoy doesn’t show signs of leaving anytime soon. Protestors have said they will remain until changes occur with the country’s mandates.