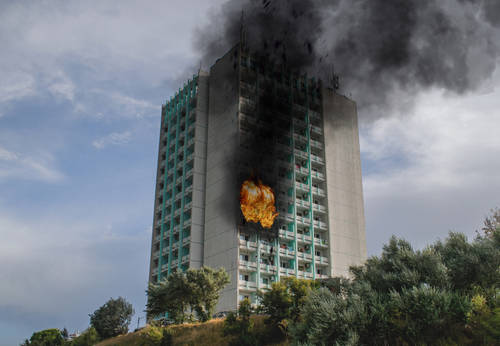 Somali authorities ended a 30 hour siege on a hotel in the capital on Sunday, after 21 people were killed and over 110 wounded. The attack was the first major terror attack in Mogadishu since the new leader took over in May.

Al-Shabab, an Islamic extremist group, claimed responsibility for the attack. It remains the biggest threat to political stability in the volatile Horn of Africa nation.

Police have not yet given a detailed explanation of how the attack unfolded, and it remains unclear how many gunmen entered the hotel. Two car bombs were used to gain access to the hotel on Friday evening.

Somalia’s new president has said he will take the offensive against al-Shabab. The group claims the attack was in response to that assertion.

The U.N. condemned the attack and said it supports the people of Somalia in their fight against terrorism.

Witness Abdullahi Hussein said he was inside a hotel room when the militants started shooting. He saw several bodies lying on the ground outside hotel reception.

You can view footage of gruesome attack below:

A group of Al-shabab militants stormed this upscale hotel in Mogadishu. They began grabbing guests and staff as hostages, killing at least 21 and wounding many more, including children. The U.S. Embassy condemned the attack and pledged to hold murderers accountable.

For more information on this story, please consider the news outlets listed below.