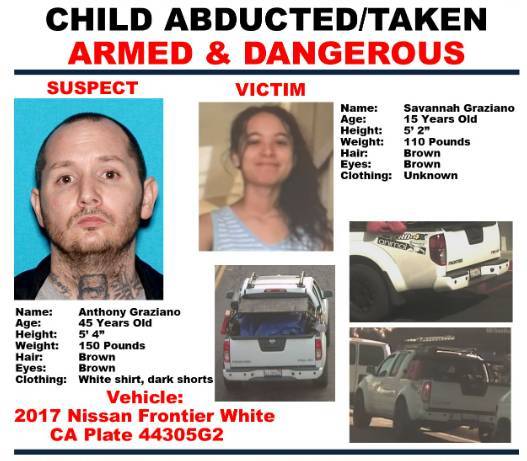 An Amber Alert murder-and-kidnapping suspect and a teen girl are dead after a police chase in Victorville ended with shots fired.

Sheriff’s deputies believe the passenger was a 15-year-old girl dressed in tactical gear. She was struck by a bullet while trying to get out of the car during the shootout. Later, she passed away in the hospital.

Official identification will come from the county coroner later, according to sheriff’s deputies.

A citizen called 911 Tuesday reporting seeing the suspect and 15-year-old girl at the center of the Amber Alert in a white truck near Barstow.

According to the San Bernardino County Sheriff’s Department, the truck matched the description of the Nissan the suspect was last seen driving.

Around 11:15 a.m., the California Highway Patrol started pursuing the vehicle.

Upon responding to the call, deputies observed a man, 45-year-old Anthony John Graziano, fired a shot at them through the rearview window.

In Hesperia, the vehicle “became disabled.”. It was not immediately clear why the vehicle stopped working.

Graziano and deputies engaged in a “fire fight,” officials said.

Graziano was struck by police shots fired at the truck.

Savannah Graziano, wearing tactical gear, jumped out of the truck and ran toward deputies during the shootout. The firefight led to her being struck.

He was also said to be wearing some sort of tactical gear.

Following the pursuit, the CHP Inland division reported that the 15 Freeway was closed due to police activity for an unknown period of time.

Savannah was kidnapped by her father during a domestic violence incident in Fontana on Monday, leading to an Amber Alert.

The Amber Alert was deactivated just after 11:30 a.m.