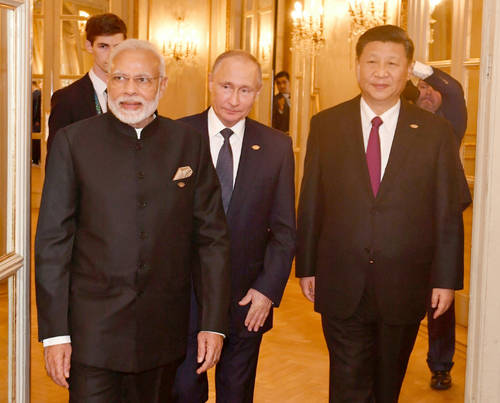 Narendra Modi has rejected Moscow’s invasion of Ukraine, telling Russian President Vladimir Putin that the time for war has passed.

Following a series of setbacks for Russian President Vladimir Putin, Modi reminded him that “democracy, diplomacy, and dialogue” are essential for peace.

As Modi said during a face-to-face meeting on Friday, on the sidelines of a regional summit, Russia is becoming increasingly isolated diplomatically. A day earlier, Putin admitted China had concerns and questions about the invasion as well.

At the Shanghai Cooperation Organization summit in Samarkand in Uzbekistan, Modi told Putin, “I know the era we live in is not one of war, and we have talked over the phone many times about the importance of democracy, diplomacy, and dialogue in our world.”

The Indian Ministry of External Affairs readout of the meeting states, “We will definitely have an opportunity to discuss how we can move toward peace in the coming days, and I will also have the chance to learn more about your viewpoint.”

In response, Putin assured the Indian leader that he understood his concerns.

A series of major defeats on the battlefield in recent weeks has resulted in Putin’s forces suffering a series of setbacks, including Modi’s apparent criticism of Russia’s invasion. Ukraine claims to have retaken some 8,000 square kilometers of territory from the Russians.

Russia appears to be on a losing streak diplomatically, as evidenced by exchanges at the Samarkand summit, which brings together leaders from China, India, Pakistan, Iran and four Central Asian nations.

As a counterbalance to the U.S. and its allies, it seemed that Moscow and Beijing would present a united front at the summit.

As a result of Russia’s invasion, signs of division have emerged, which has unnerved the leaders of former Soviet territories in Central Asia, who are concerned about Russian encroachment.

Over the past few days, it has been suggested that both India and China have reservations about the war, which gives Moscow pause for consideration. Considering the two countries are also Russia’s biggest customers for oil.

At the summit, Putin acknowledged China’s concerns and said, “We highly value the balanced position of our Chinese friends.”

As with Beijing, New Delhi has long-standing ties with Moscow dating back to the Cold War, and has so far largely avoided condemning the Russian invasion outright.

In a statement released after Friday’s meeting, India’s Ministry of External Affairs said discussions between the two leaders “also centered on global food security, energy security, and fertilizer availability in light of the challenges arising from the current geopolitical situation.”

“They agreed to remain in touch,” the ministry added.

As part of the meeting, heavy shelling continues in parts of Ukraine that have recently been retaken from the Russians. According to Ukrainian officials, at least 440 graves have been discovered at a mass burial site in Izium, a city in the recently liberated Kharkiv region.