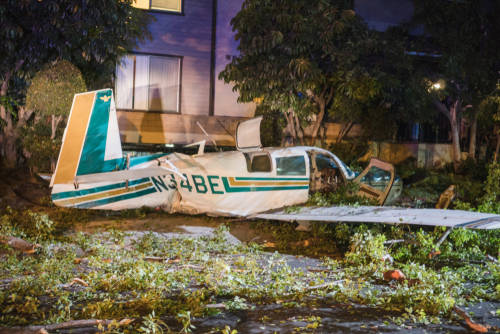 Police and fire departments located the wreckage of a Cessna 172 airplane in an unlikely place. Three people died in the lethal crash- two males from Burnsville and a female from St. Paul. The wreckage of a small plane was found crashed into a home in Hermantown just before midnight on October 1.

Alyssa Schmidt, Matthew Schmidt, and Tyler Fretland were killed when their small airplane crashed into a home and yard just south of Duluth International Airport.

Two occupants in the house were not injured in the crash, but are grateful for making it through. According to Hermantown Communications Director Joe Wicklund, a Cessna 172 airplane crashed into a home in the 5100 block of Arrowhead Road.

A Cessna took out much of the second floor of the home at 5154 Arrowhead Road, but the occupants were unscathed. Jason Hoffman and and his wife Crystal Hoffman were both in the home at the time of the incident.

Hoffman noticed an airplane wheel next to his bed and realized it was a crash. The couple found their cat unharmed in the basement and eventually left the home when the dust and rubble became overpowering.

Hoffman believes the house may be a total loss, because it was the first house he and his wife saw when they moved to Worthington, Minnesota.

For additional information on this story, please consider the news outlets listed below to stay in the know.