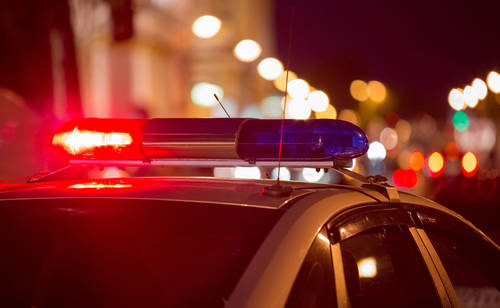 Brandon Leohner, 27, was arrested Tuesday on charges of kidnapping after driving recklessly through Palm Coast with the child unsecured on his lap.

The couple had argued, but the confrontation did not turn physical except when Leohner became paranoid and accused his girlfriend of setting him up.

A sheriff’s deputy observed Leohner driving at 65 miles per hour and pursued him as he sped into a Target shopping center and a McDonald’s parking lot. Two deputies approached Leohner from opposite directions and one shot Leohner with a Taser.

Leohner was Tased after fleeing recklessly and failing to put down the baby after being told six times to do so.

Leohner’s girlfriend told law enforcement that he had a gun in the vehicle, and he threw out the gun into a swale and tried to evade arrest by crawling under a citizen’s vehicle and pushing deputies away in the McDonald’s parking lot.

Leohner was attacked by Keanu, a German Shepherd, and fell to the ground, where five deputies swarmed on him and yelled for him to put his hands behind his back. The dog bit down on Leohner’s leg for 16 seconds, drawing blood.

Leohner was charged with kidnapping, child neglect, fleeing and eluding police, reckless driving and resisting an officer with violence. He was also charged with using a child as a shield.

To learn more about this shocking story, please consider the news outlets listed below.