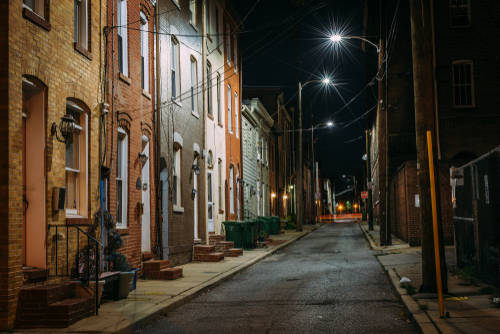 A crew member was forced to flee a set in Baltimore after being confronted by two men, one of whom reportedly brandished a gun. The producers have now vowed to increase security measures on the set.

The Baltimore Banner, citing police, reported that drug dealers urged those working on the show to clear the set and threatened to shoot someone, while also attempting to extort $50,000 from the crew — but the producers refused to pay.

A driver was confronted by two men on the set of “Lady in the Lake” on Friday afternoon. One of the men brandished a gun and demanded money but they ultimately fled the location when the producer of the show told them they were not going to get anything.

Endeavor Content described filming the limited series in Baltimore as a “privilege” and thanked the city and its residents for their support.

The show, starring Natalie Portman and Moses Ingram, takes place in 1960s Baltimore and centers around a white housewife turned reporter who is investigating an unsolved murder, and crosses paths with a Black community activist pursuing social justice, according to the Baltimore Banner.