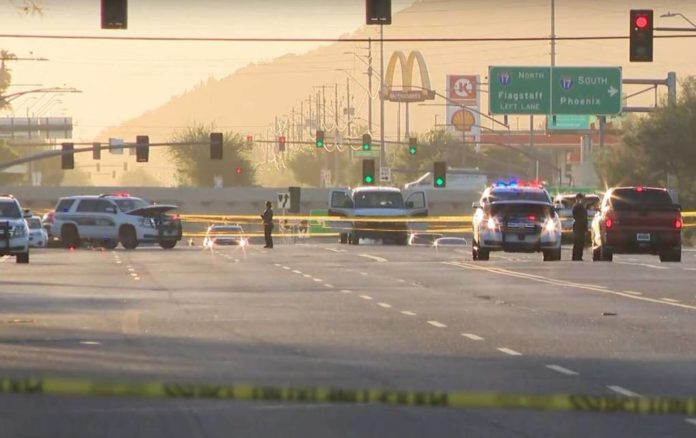 Phoenix police say that the shooting happened near 26th Ave and Deer Valley after officers responded to reports of a shooting at the Days Inn around 8:45 p.m.

The suspect was shooting toward a nearby business. A man and a woman pulled into the parking lot and were shot and killed by the suspect as police arrived on the scene.

The shooter, wearing full tactical gear, tried to throw a Molotov cocktail at a business but failed to catch fire.

The shooter then turned towards oncoming police vehicles and began to shoot at them.

Two Phoenix police officers were hospitalized during a shootout with the suspect. The Bureau of Alcohol, Tobacco, Firearms, and Explosives is assisting in the investigation.

Two officers were injured after a bullet struck one, and another was hit by shrapnel.

In an update Monday morning, the officer shot in the shoulder returned fire after getting out of his patrol car as the other officer worked to help render aid. Both officers were rushed to the hospital, one of whom was released early Monday morning.

The Deer Valley Road offramp from southbound I-17 is closed until the multi-agency investigation is complete.