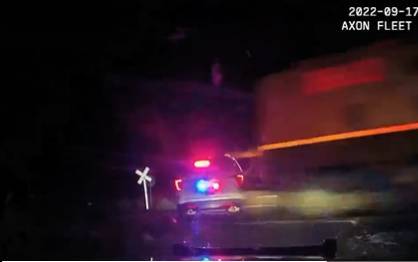 In a dramatic police video, a freight train strikes a police patrol vehicle with a handcuffed 20-year-old woman in the back seat. Fort Lupton Police Department provided 8 minutes of edited video from the incident to CBS Colorado.

Dillon Thomas tweeted an edited excerpt of the video, in which police talk to the woman, the train hits the vehicle, and police rush to the broken down car for immediate medical aid.

In the crash, Yareni Rios-Gonzalez, of Greeley, sustained serious injuries. The Colorado Bureau of Investigation is investigating the accident. She is expected to survive.

VIDEO: With a suspect detained in the back seat, a police car is crushed by a fast-moving train in Weld County

Suspect was handcuffed in the back seat as the train blared a horn leading up to the crash. I will have more on @CBSNewsColorado  4/5/6p pic.twitter.com/P0w3hd5Bs2

On Friday evening, multiple law enforcement agencies responded to a report of a firearm-related road rage incident in Fort Lupton. The Platteville police officer parked his patrol vehicle on the crossing just past Rios-Gonzalez’s car.

During the search of her car, officers placed her in the back of a police vehicle, which was hit by a train.

A statement from the Fort Lupton Police Department said officers cleared the suspect vehicle to determine if there was anyone else inside. After the female detainee was placed in the police vehicle that police vehicle was struck by a northbound train, Fort Lupton officers summoned medical help and began life-sustaining measures.

A Platteville Police Department officer was placed on paid administrative leave, according to the Denver Post. In an email to the newspaper, Police Chief Carl Dwyer did not disclose the name of the officer or answer any other questions about the traffic stop.