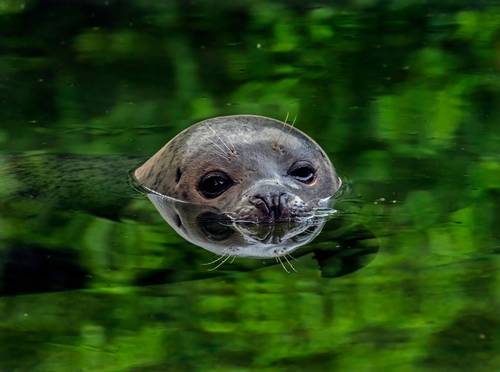 A seal, Schubert, who has been hanging out in a Beverly pond for a week, made a surprise trip overnight to the Beverly Police Station to turn himself in.

The grey seal appeared in Shoe Pond in Beverly, northeast of Boston, and was quickly captured by a team of wildlife experts, firefighters, and the police department’s “entire midnight shift”. He was transported to Mystic Aquarium in Mystic, Connecticut, where aquarium staff will perform a medical exam before releasing him back into the wild.

A seal named Schubert, who had been the talk of the town in Beverly for days, showed up at police headquarters in search of help early Friday morning.

Schubert the seal became a celebrity on the North Shore and a local shop made t-shirts in his honor. Officials said they took Schubert to Connecticut because they’re afraid he’ll get stuck in the pond again.

When he was finally captured, Mystic Aquarium rescuers made a shocking discovery- this wasn’t Schubert’s first time in a situation like this. They recognized his facial markings from another incident several years ago. The seal needed rescue back in 2018 and was released shortly after.

Rescuers are planning on releasing him back into the wild as soon as possible. For additional information on Schubert’s story, check out the news outlets below to stay in the know.