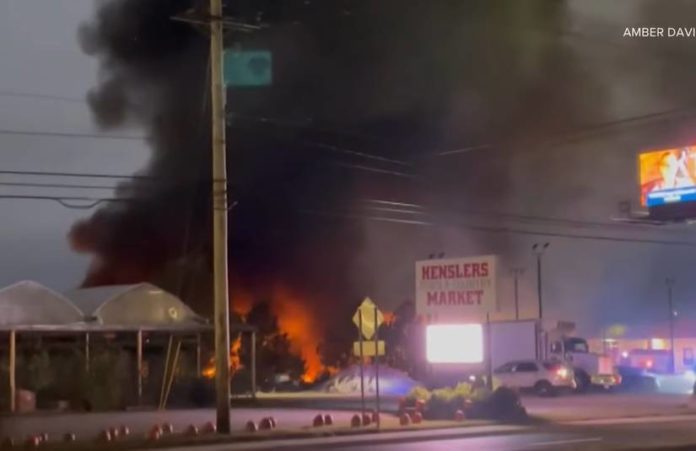 In a 1974 Beechcraft King Air E90 crash in a Pioneer Buick GMC parking lot, the pilot and other occupants of the plane were killed, according to Lt. Nathan Dennis of the Ohio State Highway Patrol.

According to Flightradar24 data, the plane took off from John Glenn Columbus International Airport around 6:35 a.m. and crashed shortly after 7 a.m., just miles from the crash site.

Dennis said no one outside the plane was injured. The names of the plane occupants were not immediately released.

“A few vehicles were damaged, and the building was damaged as well,” Dennis said.

Amber Davis, a Marietta-area resident who heard an explosion at home and went out to investigate, posted video of the scene to Facebook showing thick, dark smoke and orange flames rising from the parking lot.

Marietta police Cpt. Aaron Nedeff says the fire has been put out.

A hotel and a farmers market flank the dealership on a commercial stretch of State Route 7, which is also the Ohio River Scenic Byway.

The city of Marietta has a population of about 13,000 and is located a 13-mile drive northeast of Parkersburg.

An FAA statement said the National Transportation Safety Board and the Federal Aviation Administration are investigating the incident.

“The NTSB will be in charge of the investigation and will provide updates,” the FAA statement said.