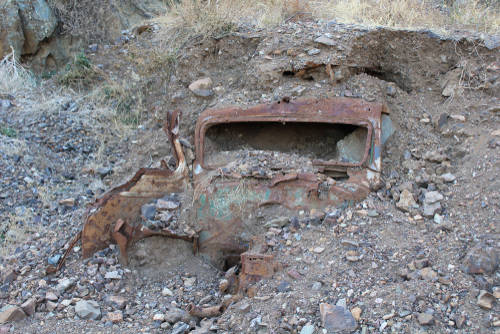 Police found a Mercedes Benz convertible buried about 4 to 5 feet underground. The former owner of the estate is believed to have buried the car about 30 years ago after reporting it stolen in 1992.

Landscapers found a car buried in the ground at a 15 million dollar property, and investigators have tied it to the former owner, Johnny Lew. No bodies have been found, but cadaver dogs have detected something suspicious.

Johnny Bocktune Lew, who owned the home from 1990 until 2014, was convicted of murdering Karen Gervasi in 1965, but the conviction was overturned due to an error in admitting hearsay statements. Lew passed away in 2015, so there are no living sources that could provide answers.

Lew was found guilty of murdering a 21-year-old woman in 1966, but was released from prison in 1968 after the California Supreme Court reversed the conviction. He was later convicted of two counts of attempted murder in 1977 and spent three years in prison.

The car at Lew’s previous property was a peculiar sight. By Friday, technicians had excavated the car’s passenger side and opened its trunk, where they found more bags of unused cement. Atherton police believe Johnny Lew’s car was buried in the 1990s at a home that he built himself.

Police said the current homeowners had no idea the car was buried there and that they only spoke to Lew in passing. Neighbors are still trying to figure out why Lew would report his car stolen, fill it with cement and bury it in the backyard.

Neighbor Don Traeger claims that he had no idea Lou once told investigators he was involved in organized crime, or that he had run-ins with the law, including a plot to sink his own yacht by the Golden Gate Bridge.

Authorities said they had excavated the majority of the car’s passenger compartment on Friday, Oct. 21. A cadaver dog had indicated possible human remains. Those potential remains could be decades old.

Police will have no more updates until Monday.