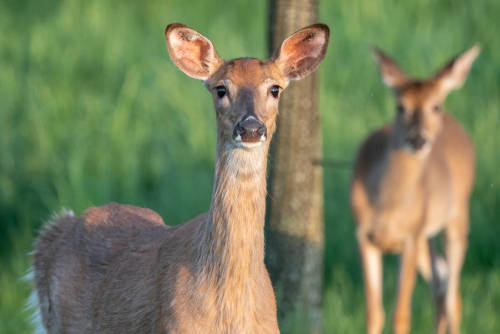 Deer in Ohio are becoming infected with a disease creeping into other parts of the Midwest. When approached by police, the deer didn’t move despite their proximity.

“This deer was just standing there and unresponsive to us, just like it wasn’t afraid,” said James Love, public information officer for Ohio‘s Colerain Township Police Department.

A deer suffering from a disease called epizootic hemorrhagic disease (EHD) was found by the police in Ohio. The disease causes deep-seated symptoms that are not visible to the naked eye.

Deer infected with the disease have a high fever, ulcers inside their body, and internal bleeding. They may also appear listless.

“They’re experiencing a lot of things that are not visible to the naked eye,” said Michael Tonkovich, the deer program administrator for the Division of Wildlife at the Ohio Department of Natural Resources.

Deer infected with EHD have been referred to with the misnomer “zombie deer,” but Tonkovich cautions against using the term to describe any deer disease or unusual deer behavior.

Deer suffering from EHD are infected by biting flies known as midges. The insects transmit the virus that causes EHD into the host’s bloodstream, and the deer may die 8-36 hours after the symptoms develop.

Midges are breeding more quickly in warm weather, which could impact the hunting season in local townships in Ohio.

It takes a cold front or freeze-over to kill off midges and destroy their eggs in breeding grounds.