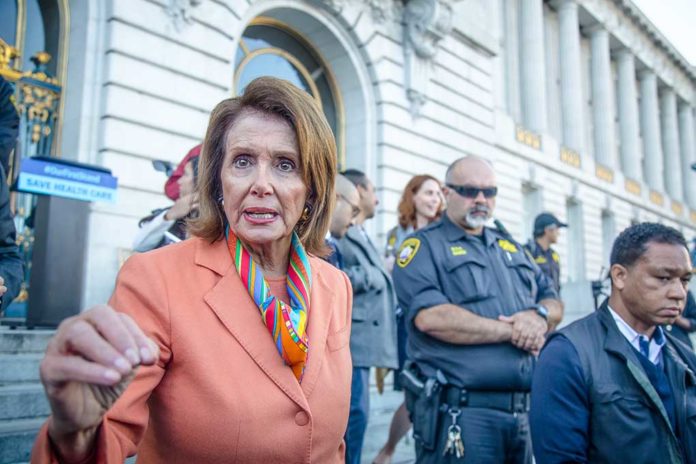 (InformingNews.com) – Speaker of the House Nancy Pelosi has done quite well for herself financially. With an estimated net worth of over $106 million, she and her husband, Paul, have reaped in at least $30 million from stock trading over her years in office. This situation has some people questioning whether the Pelosis are involved in insider trading and if it’s fair to allow members of Congress to hold shares in the market.

Nancy and Paul Pelosi have made millions from Big Tech. They’ve gained at least from $5.6 million to $30.4 million in the last 15 years from five Big Tech companies including Google, Facebook and Apple.

Pelosi’s spokesman, Drew Hammill, said the speaker doesn’t own any stocks personally. He explained Pelosi isn’t involved in the process, and that her husband handles it all. Nevertheless, all the stocks are in industries the top House Democrat directly regulates. And the fact is, knowingly or not, her actions as a legislator can affect the performance of these companies

There is no proof she or her husband have used insider information to make trade decisions; but they are outperforming the S&P 500, which does raise questions. People from across the political spectrum have expressed anger about an unfair advantage, which Pelosi has brushed off.

But the focus of the outrage revolves around her decisions in Congress having a direct effect, good or bad, on the same companies she is personally invested in. Notably, She’s also had a hand in slowing any progress toward accomplishing Big Tech regulation. Incidentally, some of the companies Mr. Pelosi is invested in would be negatively impacted by such regulations.

The speaker claims stock trading is part of the free market and refuses to support current legislation banning trading among members of Congress.

Criticism of the Speaker

Former US Office of Government Ethics Director Walter Shaub said Pelosi putting stocks in her husband’s name is basically a cover. She more than likely has shared insider information with him at one point or another. Shaub also noted that the average person is not privy to the information she gets, the kind of information that provides insight into the inner workings of publicly traded companies and information about factors impacting stock values–which could, hypothetically, allow her to tip off her husband and benefit through his investments.

The founder and director of the Revolving Door Project, Jeff Hauser, said lawmakers should not own companies. He explained that access to insider information gives them an unfair advantage and clouds their judgment when it comes to making policies.

Representative Michael Cloud (R-TX) is behind the two bills trying to stop Congress members from trading. He said government leaders should be more accountable and set a better example. When the public sees these politicians making big money from stocks, it sends the wrong message, especially in challenging times when the average American is struggling financially. It doesn’t look good when the Speaker of the House has financial ties to the same companies she’s supposed to be regulating.

Bipartisan criticism abounds. Republicans and Democrats are coming together on this. Other supporters of Cloud’s legislation include Senator Elizabeth Warren (D-MA), Representative Alexandra Ocasio-Cortez (D-NY) and Representative Chip Roy (R-TX).

The only current regulation on Congress regarding stock trading is the 2012 STOCK Act. It permits members to trade as long as they report within 45 days.

Since its passing, there have been investigations. Senator Kelly Loeffler (R-GA) and Senator David Perdue (R-GA) underwent scrutiny for insider trading in 2020. Senator Diane Feinstein (D-CA) and Senator Rand Paul (R-KY) got in trouble for not disclosing in time. There have been no prosecutions.

Unfortunately, Pelosi isn’t the only one in Congress participating in this innovative, apparently legal and accepted form of regulatory capture. It is up to voters to demand representatives who will vote to ensure there is no possibility that legislation created in the US Congress has anything to do with the personal gain of the individuals who make up its body.

Do you think members of Congress or their spouses should be allowed to benefit from the success or failure of companies they are supposed to be regulating? Or do you think the possibility or appearance of impropriety alone is enough reason to make it illegal? Send us a reply and let us know what you think.