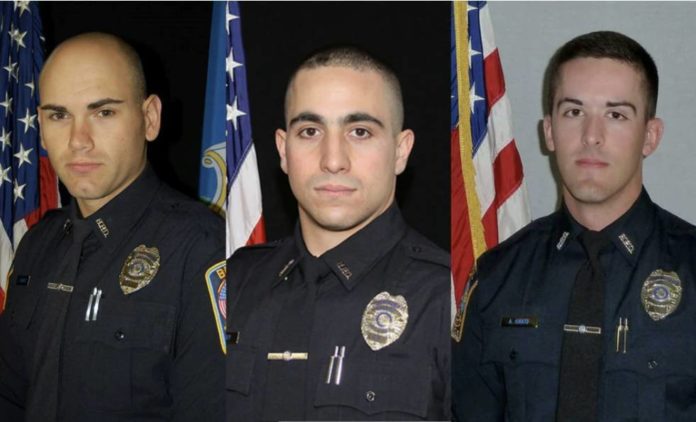 In a deliberate act to lure law enforcement to a Bristol address, two officers were killed and one seriously injured.

Sgt. Dustin Demonte, 35, and Officer Alex Hamzy, 34, were identified as the two officers who died.

Alec Iurato, 26, was the officer seriously injured. According to Bristol police, he underwent surgery at St. Francis Hospital.

Troopers confirmed that a suspect was also shot and killed. The suspect has been identified as Nicholas Brutcher a 35-year-old male.

Bristol police said they were ambushed after they were lured to a home for a bogus domestic incident between two brothers.

Outside, the suspect awaited the officers. He was wearing camouflage clothing, according to sources.

According to state police, Nicholas Brutcher had already killed Hamzy when the officers arrived. Demonte, the second officer, later died in the hospital. In the hospital, Iurato received treatment for serious injuries.

At the scene, Nicholas Brutcher was killed.

Brutcher’s brother, Nathan, 32, was also injured. As a result, he was transported to St. Francis Hospital.

The incident was classified as isolated by troopers.

“They answered a call for duty and responded without hesitation,” Gould said. “That’s what they did every night before that, and that’s what we’ll continue to do day after day. Our community has been rocked. Our police department has been rocked.”

“We’re united in immeasurable grief for those hero officers, for their families and friends and for all of our law enforcement personnel,” said Bristol Mayor Jeff Caggiano.

The officers were transported to Bristol Health escorted by a heavy police presence.

Eyewitnesses reported being frightened by the frequent gunfire.

“I probably heard 12 to 15 bangs, looked around about a minute later, [then heard] another rapid fire and then one single shot,” said Ken Przygocki, an eyewitness. “Words can’t explain it. These guys protect us. For them to lose their lives which they know every day you got out there life or death.”

The mayor of Bristol has announced a vigil will take place at 5:30 p.m. at Bristol Eastern High School, in addition to creating the “Bristol Police Heroes Fund”.