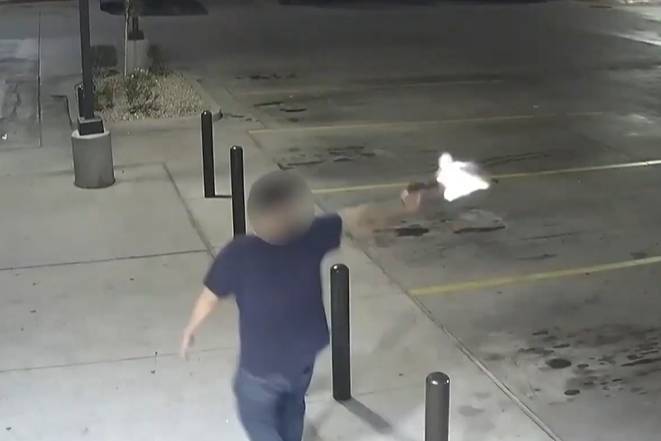 On Thursday, Phoenix authorities released footage of a man shooting at police officers in a patrol vehicle after speaking with them outside a convenience store.

Two officers were on their way to a patrol vehicle when a man began talking to them outside a convenience store near 59th Avenue and Buckeye Road on Oct. 27.

After getting into the car, police said the man talked to them through the driver’s side window. Surveillance footage captured the vehicle backing out of a parking space when the suspected shooter pulled out a gun and fired a shot.

Police said he fired another round after pointing the firearm at the officers. The second round hit the vehicle’s spotlight, police said. The man then ran into the store with the firearm, police said.

Officers are seen running after him with weapons raised, ordering him to the floor for handcuffs. He gets down on his knees with his hands raised.

As the suspect lies face down on the ground, both officers strike him with their weapons.

One officer kicked the man in the back in response to the suspect’s apparent pain; the suspect was later taken to a hospital where he was treated for unspecified injuries.

The takedown was recorded on a cellphone by a store clerk, which authorities also released.

A criminal and administrative investigation is underway, authorities said. The Maricopa County Attorney’s Office will review the findings.