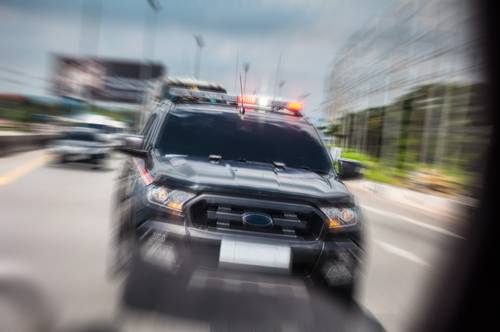 A man stole multiple vehicles, rammed into police cruisers, and smashed through the family’s gates in a desperate attempt to get away from police. He was eventually pinned in against a gated driveway by a police vehicle but hit reverse and fled again. Three people were hospitalized with crash-related injuries over the course of the chase.

The chase began when a black Honda Civic was seen committing traffic violations, and the driver sped off. Police followed him into Anaheim, where he got on and off the 91 Freeway multiple times.

Authorities chased a suspect speeding erratically in the dark-colored sedan. He also tried to steal a pickup truck, but the suspect was unable to break into it. Instead, he returned to the sedan and continued fleeing from the police.

During the chase, the suspect tried to find another avenue of escaping potential police custody. To do this, he needed to find yet another vehicle to continue his escape.

The suspect broke into a home and got into a fight with the residents inside. He stole their utility truck and drove off, nearly hitting some of the residents and their pets.

A sheriff’s cruiser was the vehicle that rammed the stolen utility truck, and flames broke out underneath the truck after the collision. Deputies eventually got the driver out and took him into custody.

The suspect lost a front tire on the stolen truck, ran red lights and sideswiped multiple vehicles before crashing at a gas station. Deputies used fire extinguishers to put out the flames, generating clouds of smoke, while the suspect was still barricaded inside.

The owner of the stolen vehicle was at a loss after the incident because his work vehicle was damaged. However, he was able to rent a new car so that he could continue to finish his job.