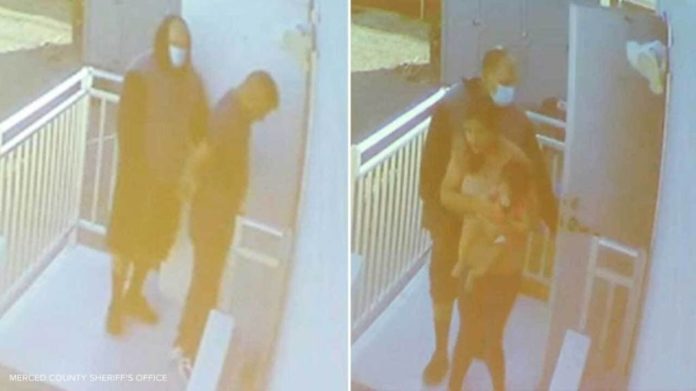 Authorities recovered the bodies of 8-month-old Aroohi Dheri, her parents and uncle in an orchard in central California’s Merced County, and said the killings were “completely and totally senseless.” Their bodies were recovered 2 days after they were kidnapped.

Authorities released surveillance footage of the kidnapping at the family’s0 trucking business. It shows Jasdeep Singh and Amandeep Singh being held captive with their hands tied behind their backs.

The family was kidnapped at gunpoint from their business Monday morning in Merced, California, authorities said. Moments later, the suspect leads the two men and the baby into Amandeep Singh’s pickup truck and drives away.

A family member had urged people to come forward with any information in the case before the bodies were found Wednesday evening.

Police were able to identify the suspect and arrest him for the fatal kidnapping. Jesus Manuel Salgado, 48, was taken into custody in severe condition as he attempted to take his own life, according to the Merced County Sheriff’s Office.

Salgado’s criminal record has previous offenses as well. The suspect in custody was convicted of armed robbery and false imprisonment in 2005 and was paroled in 2015, according to the sheriff’s office.

Merced County officials found the bodies of the four victims, including an 8-month-old girl, on Oct. 5, 2022. Investigators believe others may have been involved in the killings, though they did not elaborate when sharing this suspicion. The suspect is providing information to investigators, who are working with him to identify a motive.

For additional information on this story, please consider the news outlets below.