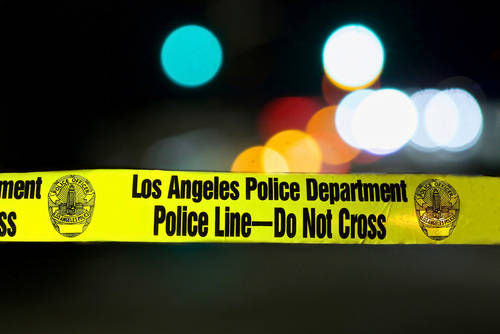 An attorney for the family of a Los Angeles Police Department officer who died during a training exercise this year says he was investigating another officer involved in a gang rape.

A wrongful death lawsuit has been filed against the police department by Tipping’s family.

“My conclusion is that at least one officer abused force in order to try to scare or harm Officer Tipping so that he wouldn’t investigate a rape complaint,” attorney Bradley Gage said at a press conference.

In July 2021, four LAPD officers were accused of sexual assault. On the day of Tipping’s death, one of the officers being investigated participated in a training exercise in which Tipping died under suspicious circumstances.

Gage said the training “was supposed to be bicycle training,” but somehow involved a “grappling exercise” that killed Tipping.

A medical report indicates Tipping was “possibly dropped” during the exercise, but Gage says the deceased officer was beaten to death by other officers.

The county medical examiner ruled Tipping’s death an accident and determined that he was injured while other officers were fighting to save his life.

Police Chief Michel Moore told the LAPD Board of Police Commissioners in June that Officer Tipping had not sustained any laceration to the head or been struck or beaten during this training session. “After grappling with another officer, he fell to the ground and sustained a catastrophic spinal cord injury.”

According to Tipping’s mother, Shirley Huffman, her son died during an exercise designed to “simulate a mob attack,” adding that Tipping’s death was caused by “intentional acts.”

The doctor said Tipping broke three ribs, lacerated the liver, broke his neck, and suffered head injuries. Due to his injuries, the officer’s heart eventually stopped working and he became paralyzed.

“The LAPD portrays grappling as the cause of his injuries, but there is no way grappling could cause those injuries,” the attorney said.

Additionally, he addressed allegations of sexual assault from 2021.

“In July 2021, four Los Angeles police officers sexually assaulted a woman,” Gage said. “I have seen the report that officer Tipping took… the female victim claimed she was raped by four different officers of the LAPD.”

According to Gage, the identity of one of the officers accused of rape appears to be the same as one who attended the bicycle training.

Although he was unable to confirm the accused officer was directly involved in Tipping’s training exercise, Gage said, “Our investigation indicates that it was.” Gage told reporters he believes “murder is what occurred.”

Tipping’s attorney said he hopes to reveal new videos of his training on Monday.

The LAPD says Tipping was participating in a training exercise at the police academy that involved grappling with another officer while he was acting as a bike instructor. An injury to Tipping’s spinal cord resulted from a fall during the exercise, according to the department.