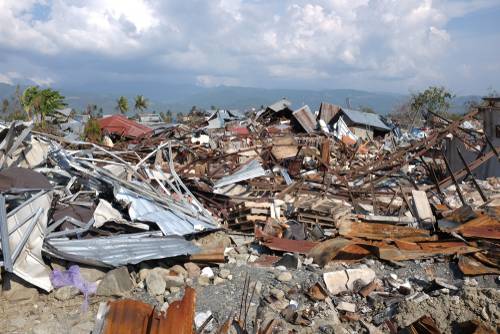 162 people have been killed in Indonesia’s West Java province by a 5.6-magnitude earthquake.

During a news conference, West Java Governor Ridwan Kamil said 326 people had been injured, with varying degrees of severity.

The quake struck the Cianjur region of West Java on Monday at a depth of 10 kilometers (6.2 miles), according to the US Geological Survey (USGS).

In total, 13,782 people have been displaced by the earthquake – all of whom will be accommodated in 14 refugee camps. At least 2,345 residences have been damaged.

According to the local office of the National Agency for Disaster Management (BNPB), four schools and 52 houses collapsed or were badly damaged. A mosque and a hospital were also damaged.

A tsunami is not a threat, according to the BNPB.

In Cianjur, government official Herman Suherman told media that some residents were trapped under rubble of collapsed buildings. Metro TV showed what appeared to be hundreds of victims being treated in a hospital parking lot.

A Muslim boarding school had also been damaged, while communications had been disrupted.

Muchlis, who asked not to be identified, said he felt a “huge tremor” and his ceiling and walls were damaged.

In an interview with Metro TV, Muchlis said, “I was very shocked. I was afraid there would be another earthquake.”.

As 25 aftershocks were recorded in the two hours after the earthquake, the BMKG warned of landslides, particularly if heavy rain is forecast.

In an earlier news conference, Governor Kamil predicted that the death toll would continue to rise.

“We expect the number of injured and dead victims will continue to rise over time since many residents remain trapped at the incident sites,” Kamil said earlier Monday.

He added that some trapped people are currently unable to be rescued, and that the situation is chaotic.

As part of the government’s response, tents and shelters are being constructed for the victims, while people’s basic needs are being met, said Kamil.

Around the Pacific Ocean, Indonesia lies the “Ring of Fire,” causing frequent earthquakes and volcanic eruptions. It stretches from Japan and Indonesia on one side of the Pacific all the way across to California and South America on the other, making it one of the world’s most seismically active zones.

During the 2004 tsunami off Sumatra island in northern Indonesia, a 9.1 magnitude quake triggered a tsunami that struck 14 countries, killing 226,000 people, most of them Indonesians.