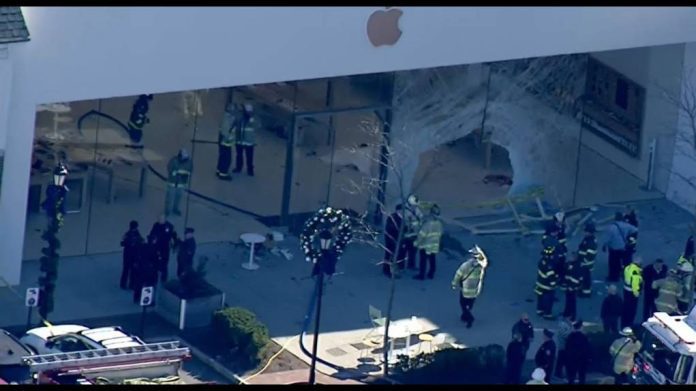 One person died, and 16 others were injured after an SUV plowed into an Apple store outside of Boston at a high rate of speed. The driver was not among the 16 people taken to the hospital.

A black 4Runner was the vehicle that drove full speed into the store on Monday, leaving many injuries. The two adjacent stores were closed and taped off as police investigated the scene.

The SUV crashed into the glass-plated storefront. Four people were trapped inside the building, but have since been rescued. Shoppers that were injured were taken to the hospital to be treated.

There is a criminal investigation that is active and ongoing.

Police have called for a tow truck to remove the car, which was stopped along the back wall of the store. There were several people that were later spotted being taken out of the store in stretchers.

District Attorney Tim Cruz told members of the media that family members of those injured and deceased are being notified about the events that happened. Cruz said people were walking on the sidewalk in front of the Apple store when the crash occurred. It is unclear whether there is surveillance footage from the crash that could help determine crucial details of the case.

The Hingham fire chief said bystanders provided first aid to the injured victims. In total, there were fourteen ambulances and seven fire engines that responded to the scene. The building commissioner and the Plymouth County Technical Rescue Team were at the scene.

A woman who works at a store on the other side of the plaza said she heard the sirens and ran over to see what had happened.

Witness Frank O’Brien expressed that he wondered how fast a car would have to go to crash into the glass in front of the Apple store. Another witness said that the life-threatening crash sounded like an explosion.