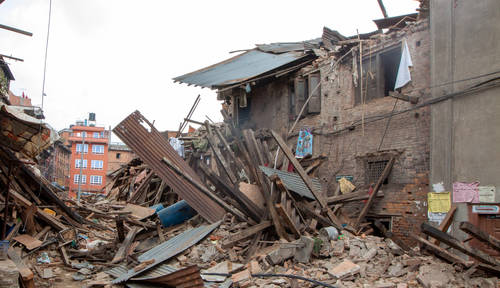 The death toll from a massive earthquake in Papua New Guinea rose to seven Monday, with many more people feared to have been displaced. The quake damaged the Ramu hydropower plant, and the Highlands Highway was also damaged.

Several people were killed when a 7.6-magnitude earthquake struck Papua New Guinea on Sunday morning. Three others were buried by landslides, and the regional power grid, internet cables and highway were damaged, but the airport was operational.

The USGS said the earthquake could cause moderate to heavy damage, but that only a limited population would be exposed to the worst of the earthquake.

A magnitude 6.5 earthquake struck Papua New Guinea on Sunday morning, sending plates and cups crashing to the ground. The USGS said the earthquake occurred as a result of normal faulting about 56 miles beneath an area of the country near the northern edge of the Australia plate.

The US National Tsunami Warning Center said there was no threat of tsunami waves, but earlier said hazardous tsunami waves were possible along the coasts of Papua New Guinea and Indonesia.

The prime minister has warned people to be cautious after the earthquake, but said the damage would be limited.

Papua New Guinea sits along a 25,000-mile (40,000-kilometer) arc that connects the Pacific Plate to smaller plates and the Cocos and Nazca Plates. This arc is home to the world’s most active volcanoes.

To learn more about this earthquake, check out the news outlets listed below.