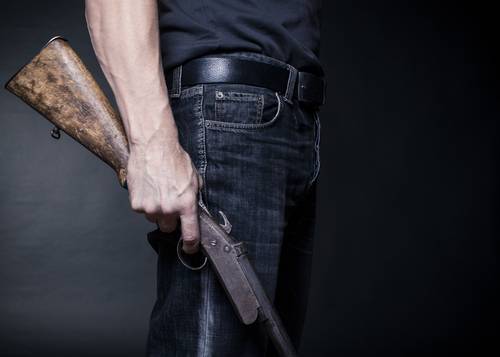 Three frantic individuals, including two juveniles, were driving through the Ranchettes in Florida when a man in a red pickup truck fired four rounds of a shotgun at them.

The victims were approached by a man in a red Dodge pickup who swore vulgarities at them. The incident happened on Thursday at the Ranchettes, near the Punta Gorda Airport. The three juveniles backed away, but Whitney followed behind them.

The victims were forced to drive into oncoming traffic to escape Whitney, and they were safely met by law enforcement.

Deputies searched the area and located a red Dodge pickup with one occupant inside. They followed the truck for less than two minutes before apprehending the suspect, identified as Steven C. Whitney.

Deputies captured Whitney after a standoff, and found a 12 gauge shotgun shell on him. A search warrant was obtained for his vehicle and a property on Maris Drive, and the gun was taken into custody of the police. The suspect was found with a black 12 gauge pump-style shotgun, ammunition, and spent handgun casings.

Nearby resident Jill Shively lives in the Ranchettes, and said kids drive up and down Grove Boulevard all the time. “They’re not mischief makers,” she said.

Sheriff Bill Prummell commended 911 operators and deputies for their fast actions, which resulted in Steven Whitney being apprehended.

Whitney could face a hefty sentence for threatening the juveniles in this way. He could receive a maximum of 10 years in prison, alongside several supervised years of release and a fine of approximately $250,0000.