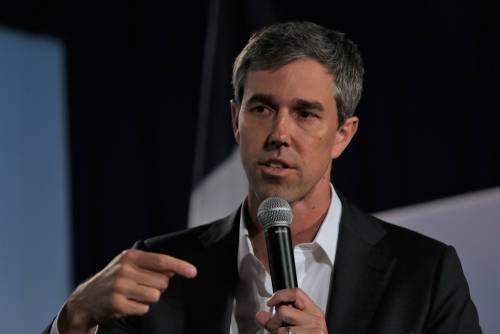 Beto O’Rourke, who is challenging Republican Texas Gov. Greg Abbott in November’s election, said the rightward shift of Latino voters is partly the result of Democrats disregarding the demographic.

Once we got to the home stretch of the general election, Biden didn’t spend a dime or day in the Rio Grande Valley or anywhere else in Texas,” O’Rourke said at the Texas Tribune Festival on Saturday. If you want to win votes, you have to lock eyeballs with the people you want to fight for and serve.”

Pew research data shows that Donald Trump carried 38% of the Latino vote in the 2020 presidential election, up 13 percentage points from the Republican candidates’ support in the 2018 midterm elections.

It was literally one word, jobs, and he kind of gave us a false choice: “Either we stay at home during this pandemic or we open up all employment positions to promote the economy,” O’Rourke said. “What did we have on our side? Not much.”

Over the past two years, the trend appears to have continued. During a special election in June, Mayra Flores, the first Mexican-born congresswoman to serve in the House, flipped the 34th Congressional District, which has traditionally been a Democratic stronghold.

In the upcoming midterm elections, Cassy Garcia and Monica De La Cruz, both Latina women, are running as Republicans.

On Saturday, Gonzales told Fox News Digital: “We’re going to win races no one thought we’d win before, and we’re going to do it by leaning into our conservative values.” In his words, “This is just the beginning of what the Republican Party will become.”

Polls in recent weeks have shown O’Rourke as an underdog against Abbott, but the Democratic candidate pledged not to make the same mistakes.

O’Rourke said Saturday that he wanted to avoid the same mistake some Democrats have made before him, which is to take vote of color, in particular Black and Latino voters, for granted.