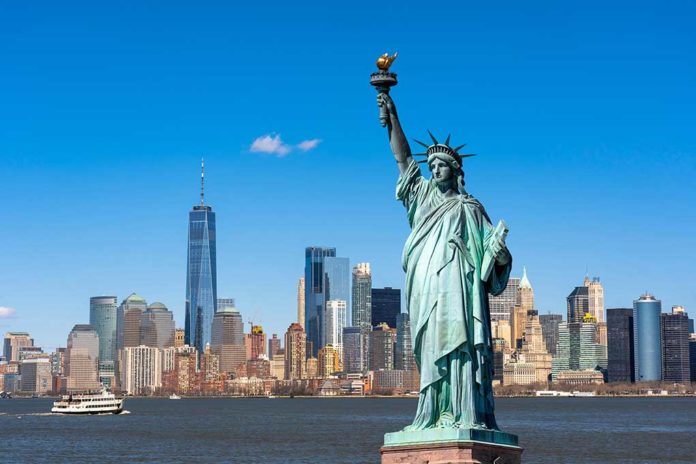 (InformingNews.com) – The Statue of Liberty is one of the most iconic structures in the world. Early immigrants coming through Ellis Island knew their lives would be changed forever upon seeing Lady Liberty. Even now today, she stands as a symbol of freedom, life, liberty and the pursuit of happiness to everyone in the world.

In 1865, Frenchman Édouard de Laboulaye suggested the French present a significant gift to the Americans; one might even call it “monumental.” Laboulaye was an avid supporter of the Americans and wanted to celebrate the centennial of their country’s independence. In addition, he also wanted to celebrate the close relationship that the US and France shared and was impressed by our stance on slavery, further cementing America’s ideals.

Frédéric-Auguste Bartholdi, a sculptor, was at Laboulaye’s announcement and felt the same, so he began to imagine and conceptualize the giant structure. Within his design came a lot of symbolism:

A project of this size would require a lot of money to accomplish. The French were to build and assemble the statue, while Americans were to complete the pedestal she stands on. Both of these projects would be costly, and each country had its own way of raising money.

In France, they used a lottery, public fees and numerous entertainment venues to procure funds necessary for building the statue. Across the Atlantic, the US was using theatrical engagements, art shows, prizefights and auctions to finance the pedestal project.

Despite all that, the efforts were simply not good enough, prompting Joseph Pulitzer, in 1885, in an effort to ignite public support, to place an ad in the New York World, which was his paper, asking for donations. Pulitzer advertised that he would print each donor’s name in his paper, and the public rose to the challenge. More than 120,000 people donated, raising over $100,000, more than enough to finish the project.

Meanwhile, Bartholdi needed the help of an engineer to work on structural problems with such a monumental build. He would acquire the help of none other than Alexandre Gustave Eiffel, the same person who would eventually create the famous Eiffel Tower in Paris.

Back in America, an architect known as Richard Morris Hunt was chosen to design the pedestal that same year. Construction was soon underway.

In order for the statue to make its journey across the Atlantic Ocean, it needed to be disassembled into 350 different pieces and stuffed into 214 crates. On June 17th, 1885, the statue arrived in the New York Harbor. However, because the pedestal was still under construction, the statue remained in pieces and packed away on what was then called Bedloe’s Island.

Construction teams completed the pedestal in April of 1886. That same year in October, President Grover Cleveland oversaw the statue’s dedication in front of a crowd of thousands.

The Statue of Liberty is a symbol of freedom and liberty that shines a light across the globe. Lady Liberty has welcomed millions of immigrants. Not only does she inspire freedom, but also hope and integrity. There very well may not be a more recognizable structure in the world, and with good reason.