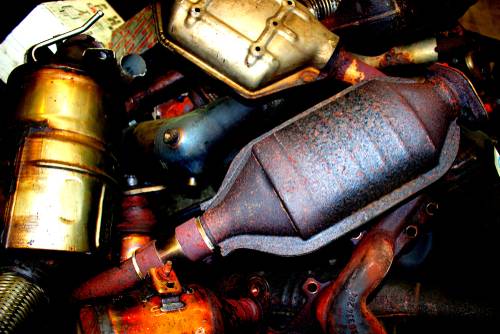 In a nationwide, coordinated operation today, law enforcement partners from across the country took down leaders and associates of a national network of thieves, dealers, and processors involved in a conspiracy involving stolen catalytic converters that were sold for millions of dollars to a metal refinery.

In total, 21 individuals have been arrested and/or charged for their roles in the conspiracy in California, Oklahoma, Wyoming, Minnesota, New Jersey, New York, Nevada, North Carolina, and Virginia.

After extensive law enforcement arrests and searches, two separate indictments were unsealed today in the Eastern District of California and the Northern District of Oklahoma charging the 21 defendants. Over 32 search warrants were executed, and the police seized millions of dollars in assets, including homes, bank accounts, cash, and luxury cars, in addition to the indictments.

“The Justice Department has conducted a nationwide operation to halt a multimillion-dollar catalytic converter theft network amid a rise in catalytic converter theft across the country by arresting 21 defendants and issuing 32 search warrants,” said Attorney General Merrick B. Garland. “We will continue to work alongside our state and local partners to disrupt criminal conspiracies like this one that target the American people.”

Director Christopher Wray said, “This nationwide network of criminals hurt victims across the nation. They made hundreds of millions of dollars in the process—on the backs of thousands of innocent car owners. The charges today illustrate how the FBI and its partners work together to stop crimes that hurt too many Americans.”

“The success of this national takedown highlights the importance and necessity of dynamic law enforcement partnerships that we foster at DHS every single day,” said Deputy Secretary John K. Tien of the Department of Homeland Security. “This calculated, cooperative whole-of-government approach across multiple states illustrates our commitment to protecting the homeland from those who seek to profit from sophisticated schemes. Homeland Security Investigations [HSI] will continue to focus its efforts on keeping these types of criminal elements off our streets while dismantling the groups behind these and other thefts.”

The IRS Criminal Investigation (IRS-CI) Chief Jim Lee said, “Just like precious metals in catalytic converters, every criminal scheme involves a money trail.” It is not uncommon for IRS-CI agents and partners to unravel financial trails, and this case is not the first. In this case, there are real victims – friends, neighbors, and businesses – and we hope the arrests will deter similar crimes in the future.

The catalytic converter is the component of an automobile’s exhaust system that reduces toxic gases and pollutants into safe emissions from the internal combustion engine of the vehicle. Due to the high value of precious metals, particularly palladium, platinum, and rhodium, catalytic converters are frequently targeted for theft. In recent years, these precious metals have been increasing in value and some are more valuable per ounce than gold. Depending on the type of vehicle and the state from which it is sourced, catalytic converters can cost up to $1,000 per converter on the black market. Moreover, catalytic converters often lack serial numbers, VIN numbers, or other distinctive identification features, which makes them difficult to locate