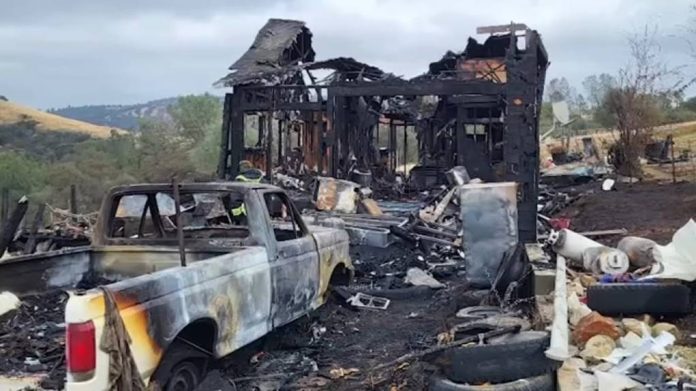 A home in Nevada County, California, caught fire after several witnesses described a bright ball of light falling from the sky.

This bright ball of light, which lit up the dark northern California sky around 7:30 p.m., landed in the middle of nowhere and engulfed a house in flames.

The Penn Valley Fire Department and Cal Fire battled the flames for hours and are now investigating what started the fire in this rural area.

NASA has one explanation for the fireball seen Friday night: the southern Taurids meteor shower.

The bright light that consumed the sky was caught on camera, and it ended in the Procita house catching on fire. Firefighters think that the bright light was a meteorite in the Taurids meteor shower that ended up destroying the home in Northeast of Sacramento.

The Southern Taurids meteor shower, which usually includes five meteors an hour surrounding its peak, is expected to include an increased number of fireballs this year due to Jupiter’s gravity pulling on the stream of debris.

Fireballs can appear at any time, but the Taurids meteors are a little more sparse. Meteor experts say that seeing a Taurids meteor, such as the one that afflicted the Procitas, is mostly a random occurrence. It’s not so easy to predict when you’ll be able to see them.

Fireballs from the Taurids are meteors larger than a meter across that shine exceptionally bright. They move slow and can be seen fragmenting and falling apart as they travel through the sky.

The Taurids are the result of a breakup of a very large comet 20,000 years ago. They are a cluster so large it takes our planet several weeks to pass through it.