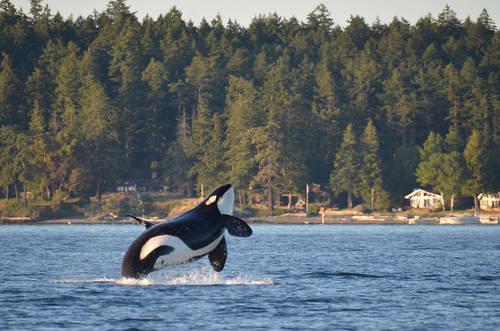 A fishing vessel sank off the west side of San Juan Island, and a visible sheen has emerged near Sunset Point. The Coast Guard is working with the National Oil Spill Liability Trust fund to minimize the impact on sensitive marine mammals.

#HappeningNow #USCG, NOAA, and other partner agencies are responding to a pollution incident west of Sunset Point, Sand Juan Island. A 49-foot fishing vessel sank w/ an estimated 2600 gal diesel/oil onboard. All crew were rescued by good Samaritan. Follow for updates. pic.twitter.com/GhbkarvloN

Monika Wieland Shields with Orca Behavior Institute told FOX 13 News that the orcas have no way of detecting the spill, adding that one catastrophic oil spill could spell the end of the Southern Residents.

Dr. Deborah Giles told FOX 13 that scientists would use specialized tools to haze orcas away from the hazardous spill.

The U.S. Coast Guard is still on-scene coordinating work with government and industry partners to ensure an efficient and effective containment and recovery response to the spill.

Scientists note that a crude oil spill would have been more catastrophic, but the majority of what spilled on Saturday was diesel fuel. A salvage team will be brought in to minimize the impact.

(1/4) #MidDayUpdate This morning a Unified Command was stood up to respond to the pollution incident west of San Juan Island. This Unified Command is made up of the USCG and State Department of Ecology as the Unified Commanders with branch assistance from @NOAA and WDFW….