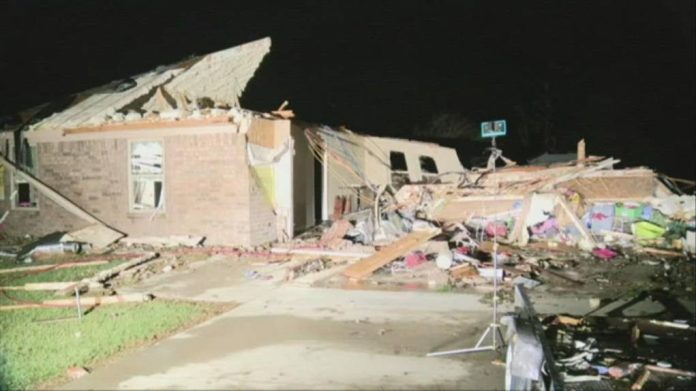 Storms will persist well into the night, bringing rain to the Ark-La-Tex region. The Mississippi River has reached record low levels due to the recent drought. 42 million people are at risk of severe storms, including Houston, San Antonio, Oklahoma City, Little Rock, Kansas City, and Wichita.

40,000 homes and businesses are without power in Texas, and 5,000 more are being reported across the state line in Oklahoma.

Some metro areas including Dallas-Fort Worth could see severe weather ramp up during this evening’s Friday rush hour. For example, a semi truck was blown over on Highway 75, and the driver was injured. The extent of his injuries was unknown.

There have also been reports of mobile homes damaged and trees and power lines down in southern Oklahoma and Texas. Several tornadoes, large hail, and destructive wind gusts are all possible in portions of north and northeast Texas, Oklahoma and Arkansas.

Oklahoma Gov. Kevin Stitt said search and rescue teams were headed to the area of Idabel, where buildings were damaged but no injuries were reported.

There are different kinds of responses to these emergencies. A severe weather watch means to be alert and prepared, and a warning means to take shelter.

Basements are considered to be a prime safe haven for these kinds of tornado emergencies. For those without a basement, the safest place to take refuge during severe weather and tornado warnings is in a windowless room at the center of the building on the ground floor.

Tornadoes in the US can happen in any month of the year, but are most common in the springtime thanks to the clash of cold and hot air as the seasons change. Nocturnal tornadoes are more dangerous than daytime tornadoes, but there is still a chance for a few rotating storms through the evening hours.