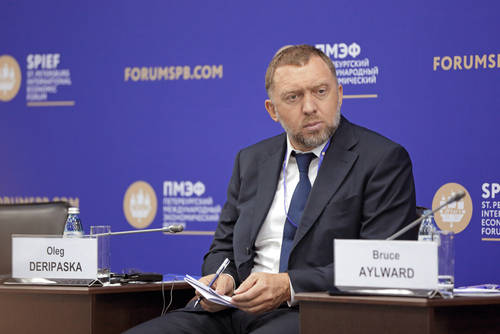 In reaction to Russia’s alleged meddling in the 2016 U.S. election, Washington blacklisted Deripaska along with two dozen other Russian oligarchs and government officials in 2018.

By using the U.S. financial system to maintain three luxury properties and employing a woman to purchase a California music studio on his behalf, Deripaska violated sanctions, the Justice Department said.

According to prosecutors, Deripaska also violated sanctions by attempting to have his girlfriend travel to the United States from Russia in order to bear his children.

“In the wake of Russia’s unjust and unprovoked invasion of Ukraine, I promised the American people that the Justice Department would work to hold accountable those who break our laws and threaten our national security,” U.S. Attorney General Merrick Garland said in a statement. “Today’s charges demonstrate we are keeping that promise.”

As part of the indictment against Deripaska, three women were also charged: Ekaterina Voronina, Natalia Bardakova, and Olga Shriki. The names of their lawyers were not immediately available.

After a brief appearance in Manhattan federal court in the afternoon, Shriki, a New Jersey resident, was released on $2 million bond. Her plea was not entered.

The Russian government has denied meddling in the 2016 U.S. election and has called the Ukraine invasion a special military operation.

According to Forbes magazine, Deripaska has a net worth of $2.8 billion and has been sanctioned by the EU and British government as well.

As a reason for blacklisting Deripaska, the Treasury Department cited his alleged role in representing a senior Russian government official and operating in the energy sector.

Rusal is still owned by Deripaska through his stake in En+ Group (ENPLI.RTS). Washington used to sanction both companies, but does not currently.

Shriki arranged the sale of a Burbank, California, music studio for Deripaska for $3.1 million in 2019, according to the indictment.

Voronina told Deripaska she found a home in Beverly Hills, California, and was negotiating payment with the owner, according to the indictment.

A charge of sanctions violation was filed against Deripaska, Shriki, and Bardakova. Furthermore, Shriki was accused of destroying evidence, while Voronina and Bardakova were accused of lying to U.S. authorities.

When the FBI raided properties linked to Deripaska’s family in Washington and New York in October 2021, Deripaska mocked the notion there was election interference.

“I cannot help but marvel at the utter stupidity on part of the American establishment who persist in spinning this story,” he wrote on social media.

There was no explanation given by the FBI for why the raids were conducted at the time.