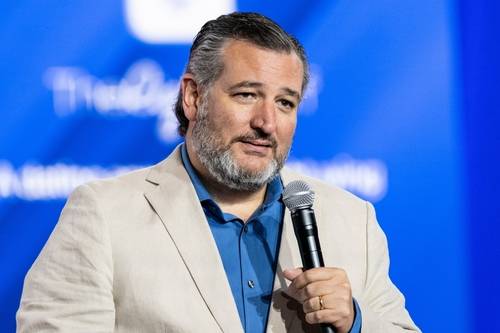 The View was repeatedly interrupted by climate protesters today as the co-hosts were interviewing Republican Senator Ted Cruz. The protesters seemed to be demanding that Cruz cover climate issues. One of the hosts responded to the protestors and told them that they do cover climate on the show.

Three members of the audience protested during Sen. Ted Cruz’s appearance on The View about climate change, and were escorted out by security.

The ABC show bleeped out audio of someone shouting at Cruz from the audience, but showed Cruz’s amused reaction. Co-host Whoopi Goldberg could be seen glaring at the offender after they interrupted the broadcast.

Goldberg responded to the protesters, asking them to leave. She did not believe the protest to be effective during the show’s taping, and expressed that the protesting interfered with her job as a moderator of the discussion.

The protesters were removed from the studio before the next segment.

Cruz’s appearance on the show promised to prompt heated discussions, and certainly kept that promise.

Cruz said he stepped up to represent Texans after Trump went after his wife and father. He argued that the economy was booming and that poverty dropped during the Trump administration. He attempted to switch the conversation to Hillary Clinton and Antifa, but Navarro asked him to lower his voice after he raised his volume during the conversation.

You can see the interview being interrupted by protesting audience members in the video below. Upon their return to the show, co-host Ana Navarro apologized to Cruz for the audience’s poor conduct while remaining true to her criticism of his political work.

The question remains of what constitutes a productive and effective protest. When these climate protestors interrupted the broadcast and shouted obscenities at Ted Cruz, many questioned whether the effort was justified or merely attention-grabbing.