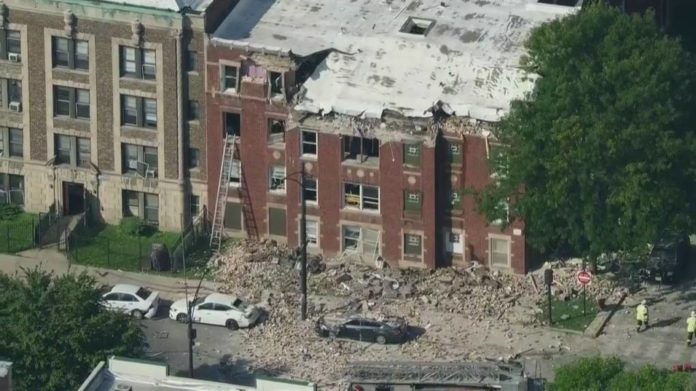 On Tuesday morning, a building on Chicago’s West Side collapsed after a nearby building exploded, leaving multiple people injured.

A building explosion in South Austin Tuesday morning caused eight people to be transported to the hospital, and three people are in serious to critical condition. Many residents were displaced, and the building next door was evacuated, according to fire officials.

The building that exploded had a history of inspection failures and alleged code violations, including dryer vents-missing flaps for gas clothes dryers.

People’s Gas said there is no reason to believe this is a gas explosion, and the fire department told them there was no odor of gas or equipment issues. The Chicago Fire Department and the Department of Buildings are on the scene of the building collapse and are providing updates.

Fire officials are shutting down access to the entire area while the investigation continues. One person taken to a hospital lives across the street.

Deputy fire commissioner Marc Ferman said that an unknown number of residents have been displaced by the explosion, and that officials are in the final stages of their search for possible victims.

The fire injured eight people, three of whom are in critical to serious condition, the fire department said. Mayor Lori Lightfoot said she was closely monitoring the situation and would provide updates as it developed.

For additional information on this building explosion, please consider the news outlets listed below to stay in the know.