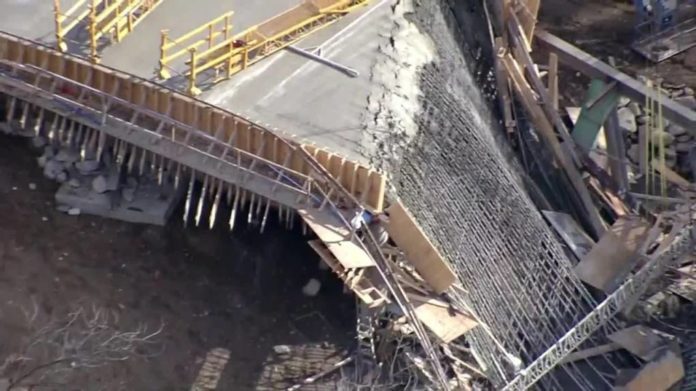 One person died and three others were injured when a bridge under construction near Kearney collapsed. The bridge was nearing completion, according to the Clay County Sheriff’s Office.

There were no previous indications of structural issues with the bridge before it collapsed, according to an update from the Clay County Sheriff’s Office. The sheriff’s office said multiple contracting companies were on scene at the time of the collapse, and an engineering contractor was inspecting the bridge before the deck was poured.

The $1.41-million project was funded through an 80/20 partnership between the federal government and Clay County. WSP Engineering designed the bridge and performed inspections at all critical points of the bridge completion process.

The sheriff’s office said there were multiple contracting companies on scene at the time of the collapse, but Clay County later clarified.

The construction project in question involved a bridge that’s been out of use for years. Construction workers just began doing work on it during the spring season of last year.

The bridge and roads leading to it were closed in 2016 and construction was expected to wrap up in early 2023. Lehman Construction Company was hired to replace the existing wood-and-metal pony truss bridge.

The sheriff’s office in Clay County revealed what it was like to be on the scene of the collapsed bridge.

We’re on the scene of a bridge collapse at NE 148th St. and Shady Grove Road. There is one confirmed fatality and several with minor injuries. pic.twitter.com/RdfYmi4dLz

The Occupational Safety and Health Administration, also known as OHSA, confirmed there were other violations against the construction company cited from 2019 and 2021. These violations were later changed through an “informal settlement”.