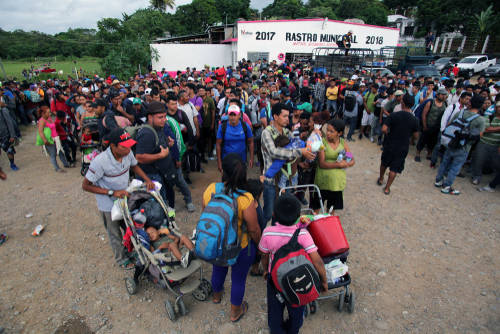 A record number of migrants are being arrested while crossing the southern U.S. border with Mexico, according to new figures Monday from U.S. Customs and Border Protection. The surge comes amid rising political tension between the Biden administration and Republican-led states.

Title 42, which denies migrants a chance to ask for asylum, initially was thought to suppress border crossings, but has instead led to a rise in the number of single adults crossing the border in search of work.

Rafael Ruiz, 54, and a group of fellow migrants were recently apprehended by Border Patrol agents near Dulzura, Calif. They had walked some 15 miles over three days through steep hills and narrow paths before they were spotted.

Border Patrol Chief Raul Ortiz said Title 42 is becoming less useful because of repeat crossings and a surge in migrants who can’t be deported using Title 42.

While Mexicans and Central Americans continue to be the two biggest groups of migrants, other countries such as Cuba, Nicaragua and Venezuela are sending far greater numbers than ever before.

Fresia Matamoros fled Nicaragua in March and began working as a bar girl at El Marinero, a local strip club, to send money to her family back home.

Mexican adult males dominated most crossings in the 1990s and 2000s, but starting about a decade ago, Central American families and children started to cross in greater numbers. The Mexican government has turned Tapachula, a city of 350,000 people near the Guatemalan border, into a migrant containment point.

After his job at Procter & Gamble closed, Jharson Valera used his severance pay to start a motorcycle parts business that failed, and he and some fellow travelers were robbed by Guatemalan police. They were granted asylum visas and took a bus north to Atlanta.

The Centers for Disease Control and Prevention sought to end Title 42 in late May, but a federal judge blocked the Biden administration from doing so. The policy will likely stay in place for months as the case is appealed.

If Title 42 is ended, the number of asylum-seeking families is likely to increase, and the number of non-asylum seekers is likely to drop significantly, said Mr. Isacson of WOLA. The Biden administration has tried to curb the surge by making deals with other countries to increase their own border enforcement.