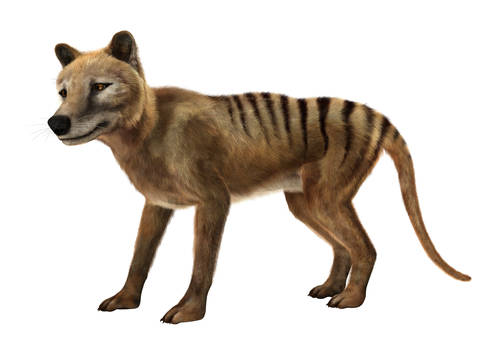 One genetic engineering and de-extinction company is on a mission to change the status of the Tasmanian tiger, a carnivorous marsupial native to Australia, Tasmania, and New Guinea. The successful birth of a thylacine, better known as a Tasmanian Tiger will introduce new marsupial-assisted reproductive technology.

Colossal is restoring Tasmanian tigers to the Australian wilderness.

This is the second de-extinction project from Colossal, which announced plans to restore the woolly mammoth to the Arctic Tundra in September 2021.

Learn how they plan to do it in this interview with marsupial evolutionary biologist Andrew Pask, Ph.D. and Colossal Co-Founder Ben Lamm.

PASK: “De-Extinction is distinct from cloning in that we don’t have a living cell from our extinct animal to start the process. We use standard stem cell and reproductive techniques to turn that cell back into a living animal.”

LAMM: “Our goals are to get as close as possible to the original, extinct species in terms of size, shape, and behavior. We are also bringing back genes and phenotypes that were extinct.”

PASK: “Humans are rapidly changing the environment. We need to develop technologies to save marsupial species from extinction, such as creating marsupial stem cells from frozen tissue or using genome editing to increase genetic diversity.”

PASK: We can’t create life from dead cells, so we need to use living cells from the closest living relative of the extinct animal to build a genome. The thylacine is a relatively recent extinction, so we have many samples in museum collections.

LAMM is working with Dr. Pask and University of Melbourne to bring back a proxy for the thylacine, which went extinct in 1936 due to human hunting. Pask’s work on the thylacine makes him the best subject matter expert we could have imagined.

PASK: When an ecosystem becomes unbalanced by the loss of an apex predator, the ripple effects across the ecosystem are immeasurable, and the rewilding of the wolves into Yellowstone has shown us how vital and complex some of these interactions can be.

PASK: The Tasmanian tiger is the only marsupial apex predator that lived in modern times, so it’s very difficult to predict what a non-native predator might do to the ecosystem.

LAMM is hoping to get our first mammoth calves in the next five to six years. The thylacine could be one of the first animals to be brought back.

PASK: “Returning the thylacine to its natural habitat would have a positive impact on the ecosystem, and would help prevent further damage to the environment.”