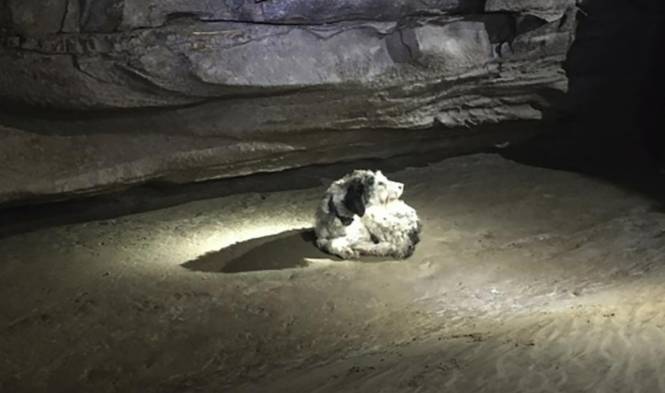 Jeff Bohnert had given up on seeing his poodle-hound mix again after she went missing in early June. Two-months later he received a text from a neighbor: People exploring a nearby cave found a dog.

Bohnert’s dogs Abby and Summer ran away from home on June 9, as they had many times before to go exploring his rural town, but Summer was back home when he woke up the next morning. Abby was missing and no one had seen her. He said the pair of dogs never separated.

“I figured something bad had happened. I mean, she’s old. She could just get overcome by the heat.”

Gerry Keene was with five other adults and five children doing a day of cave exploring when one of the kids yelled, “There’s a dog in here!”

“Their dad was like, no there’s not,” Keene said.

“She was just lying there curled up in a ball,” Keene recalled. “She lifted her head and looked at us but she didn’t respond to verbal commands. She looked like she was pretty close to being done.”

Keene enlisted the help of another cave explorer who happened to be there, Rick Haley. They knew Abby couldn’t make the estimated 500-foot walk back to the entrance.

Keene and Haley rescued Abby from the cave, carrying her through tight passageways and up a steep incline using a duffel bag and blanket. Abby had spent the last two months living in 58 degrees in a dark, wet place, so she took to the warm blanket immediately, but the rescue was tricky given her fragility.

Keene and Haley spent the next couple hours trading positions in the steep and narrow cave paths to get the dog out to safety.

Abby, a 13-year-old dog, was missing after falling into a sinkhole or a hidden entrance. She hunkered down, able to essentially live off her own body fat, and is now starting to get back the voice she lost barking for help.