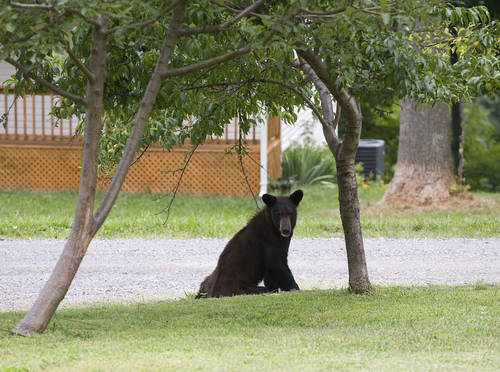 ‘It looked like somebody in a bear costume’: Bear breaks into home, devours chocolate cake – KCCI Des Moines

A black bear entered a home in Simi Valley and began rummaging around in the kitchen around 10 a.m.

A woman noticed a black bear in her kitchen and yelled for her son to come outside.

On Sunday morning, the homeowner- Vicki- leaned into the door a little bit in the kitchen and saw that her kitchen destroyed. A bear had broken in and was laying on top of the counter like a dog would.

The bear came into Vicki’s house through the back door she left open for the dogs and ate half of her chocolate cake. It came back the next day and ate the rest of the cake.

The son didn’t believe his mother that there was a bear in the house and had to check for himself. The family locked themselves in the bedroom and called the police, who tried to shoo the bear away. Once the police arrived, the black bear ran away and climbed a tree.

The bear ate avocados and nectarines, damaged some cabinets, and and ate the family’s freshly baked chocolate cake.

Residents who have similar encounters with intrusive bears are advised to leave the animal alone. It’s not recommended to approach the bear.

To learn more about this shocking bear encounter, please consider the news outlets listed below to stay in the know.