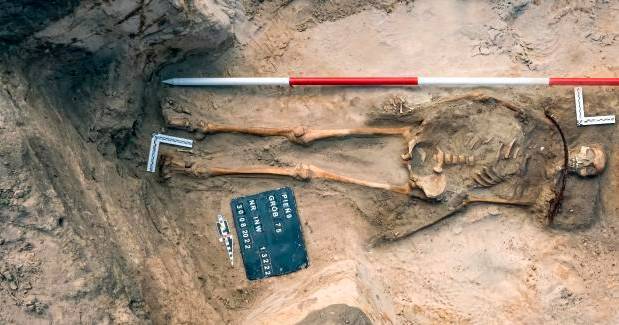 Archaeologists discovered the remains of a female “vampire” in Poland’s cemeteries; researchers announced this week.

Polish researchers found the remains of the woman, who had a sickle around her neck and a triangle lock at her feet, in the cemetery in Pien. According to ancient beliefs, the agricultural tool was supposed to keep the dead, thought to be a vampire, from returning from the dead.

A research team led by Prof. Dariusz Polinski from Nicolaus Copernicus University, Torun, made the unique discovery at the end of August.

In an interview with Polish news agency PAP, Magdalena Zagrodzka, who represents the research team, said that the human remains also had a silk headdress made with golden or silver wire.

While a lock and a sickle are associated with 17th-century superstitions, Zagrodzka said the headgear was an indication of the high social standing of the dead. Zagrodzka said that the sickle and padlock “may have been protective of a deceased person’s return, a likely fear.

In this context, the practices could be considered anti-vampiric”. . The sickles were placed on their necks, the blades facing upwards. Such a setup was thought to result in a head cut off should the dead person attempt to “get back up.”

This kind of practice became widespread in Poland during the 17th century due to the alleged vampire epidemic. Polanski explained that as well as practicing the use of a sickle, sometimes bodies were burned, crushed by stones, or had their heads and legs chopped off.

Experts are planning more studies, helped by new technologies to scan the site. In addition, researchers at the Archaeology Research Institute of Krakow University will perform DNA tests on the remains to find out more about the dead women.

Researchers were astounded by the remains still being there as they were placed in the 17th century.

In 2014 a team from the University of Alabama found a polish graveyard with six ‘vampire’ burials.