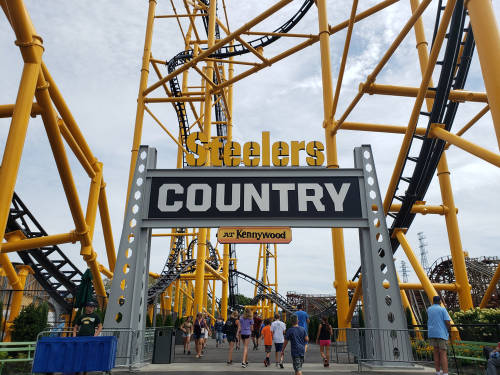 At a crowded amusement park near Pittsburgh, a gunman shot three people, including two teenagers, and sparked panic.

Approximately 200 park-goers ran to the exits after the shooting occurred in front of Musik Express, the park’s most popular ride. In an apparent attempt to escape harm, several people were trampled, police said.

According to Allegheny County Police Superintendent Christopher Kearns, there was an altercation during which the alleged assailant pulled a handgun and began firing.

According to a statement released by park officials, West Mifflin and Allegheny County police officers responded to the gunfire immediately at the park as several officers were already on location.

Officers found two people wounded at the scene, Kearns said. He said a 15-year-old boy and a 39-year-old man had both been shot in the leg. Children’s Hospital in Pittsburgh treated the teenager, while Mercy Hospital treated and released the adult victim.

According to Kearns, a third victim, also 15 years old, left the park on his own and later went to a hospital to be treated for a graze wound to his leg.

According to witnesses, the suspected gunman wore a COVID-style mask and a dark-colored hooded sweatshirt.

Police recovered a handgun at the scene.

How the weapon entered the park is being investigated by police. According to Kennywood’s website, all guests and employees must pass through metal detectors at the entrance gate, and all backpacks and coolers must be inspected.

Approximately 14 minutes before the park closed for the night, gunfire broke out.

Approximately a hundred people ran out of the park at one point, a witness told ABC affiliate station WTAE.

Following the shooting, Kennywood shut down immediately and evacuated all visitors. According to the park’s website, the park will reopen on Sept. 30.

“Our top priority is the safety of our guests and team members,” reads the park’s statement.