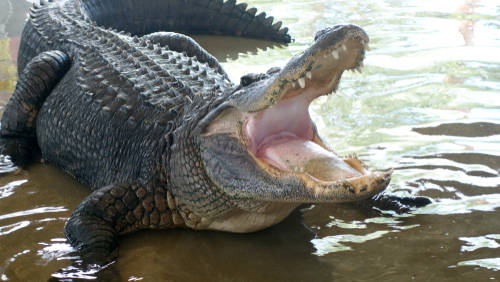 A second person this year has just died at a country club, killed by alligators. This time in Florida at the posh Boca Royale Country Club.

The older woman, according to officials, reportedly lived near the course and was seen falling into a pond at the Club.

The woman struggled to get out of the pond before alligators attacked her and pulled her underneath the water’s surface.

The Sarasota County Sheriff’s Office and the Fish and Wildlife Conservation Commission have set out to capture the alligators responsible for the woman’s death as the investigation continues. The woman’s identity has not yet been disclosed.

This year, alligators have been found in increasingly unlikely places across the United States. An alligator was recently found swimming in a lake in Wisconsin.

Last month a man at a South Carolina yacht club was eaten by an 11-foot alligator. Alligators have been known to congregate near the shorelines of shallow and murky waters. Small dogs and cats, as well as wild animals, get eaten quite often on Florida golf courses.