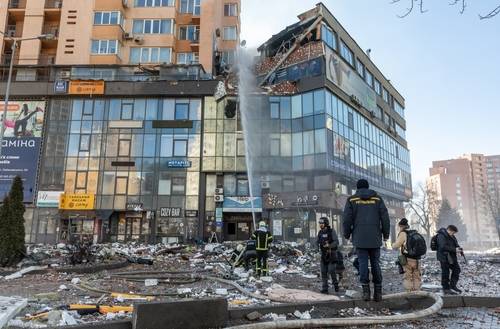 Russia said on Saturday it would step up military operations in Ukraine in “all operational areas” as Kyiv’s rockets and missiles pounded cities in strikes that have killed dozens in recent days. Russian Defence Minister Sergei Shoigu ordered military units to intensify their operations to prevent Ukrainian strikes on eastern Ukraine.

The war in Ukraine has become increasingly attritional, with Russian forces striking cities elsewhere in the country with missiles and rockets. Moscow has repeatedly denied targeting civilians.

In one recent attack, Kalibr cruise missiles hit an office building in Vinnytsia, Ukraine, killing 23 people and wounding dozens. Among the dead was a 4-year-old girl with Down’s Syndrome.

Late on Friday, Russian missiles hit the city of Dnipro, killing three people and wounding 15. A factory making missile parts were destroyed, and a busy street next to it was also hit.

The war in Ukraine dominated a meeting of G20 finance ministers in Indonesia, with the U.S. Treasury Secretary saying the conflict had prevented the finance chiefs and central bankers from issuing a formal communique. Many countries in attendance could not agree on a uniform stance on Ukraine for numerous conflicting interests.

“This is a challenging time because Russia is part of the G20 and doesn’t agree with the rest of us on how to characterize the war,” Janet Yellen said.

Western countries have imposed tough sanctions on Russia and have accused it of war crimes in Ukraine, which Moscow denies. Other G20 nations, including China, India, and South Africa, have been more muted in their response.