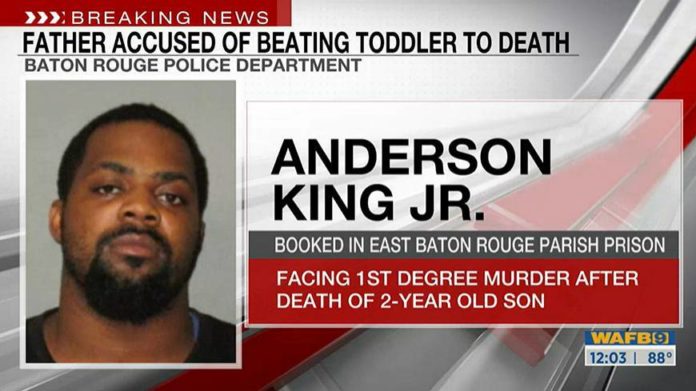 A Louisiana father was charged with first-degree murder on Tuesday after the death of his 2-year-old son.

The investigation began Sunday night when officers were called to Ochsner hospital in Baton Rouge “in connection with the severe beating of a two-year-old child victim.”

When officers arrived, they learned that King had brought his son, who was unresponsive, to the hospital, where staff attempted to perform life-saving measures, to no avail. Kyland was pronounced dead at the hospital.

According to an arrest warrant, arresting officers said that Kyland had “multiple apparent injuries” both “old and fresh” on his body.

Police said King had originally told officers Kyland had fallen down a flight of stairs days earlier, injuring his eyes and head. King said his son had not been “the same” since the fall, but admitted he had not sought medical treatment for Kyland.

King told officers that Kyland became unresponsive Sunday night, but that he had not called 911, instead leaving Kyland, to pick up his boys mother from work.

Since then, police said, King has admitted to officers slapping the child with his belt.

The medical examiner has declared Kyland’s death a homicide. Preliminary findings indicate that the cause of death was multiple blunt force trauma.