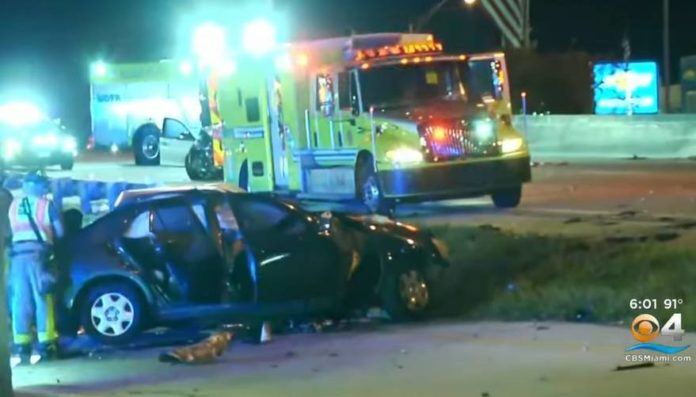 Four women and a man were killed after, authorities said, they were involved in a violent wrong-way wreck on the Palmetto Expressway in Northwest Miami-Dade that shut down all westbound lanes for hours and sent the driver who was going against traffic to the hospital.

Florida Highway Patrol and Miami-Dade Fire Rescue units responded to the scene of the two-vehicle crash near the entrance ramp at Northwest 57th Avenue, at around 4:30 a.m., Saturday.

Two vehicles are reported to be involved.

Investigators said 30-year-old Maiky Simeon was traveling eastbound in the westbound lanes in a silver Infiniti sedan when he collided head-on with a Honda where the victims were riding.

First responders used the Jaws of Life to extricate Simeon.

“Our crews had to use the Jaws to cut out one victim that was trapped in his vehicle,” said Miami-Dade Fire Rescue Division Chief Marc Chavers. “Unfortunately, in the other vehicle there was nobody alive to be saved.”

Investigators said all five victims inside the Honda were killed instantly. They ranged in age between 18 and 25 years old.

A rescue helicopter landed on the highway, and from there, crews airlifted Simeon to Ryder Trauma Center. As of Saturday night, he is listed in critical condition.

“We had to shut down the Palmetto to land the helicopter, which in turn, one of the victims was trauma alerted to Ryder Trauma Center,” said Chavers.

Troopers are now seeking the public’s help to determine Simeon’s whereabouts before the crash.

The criminal investigation into the crash is ongoing. FHP detectives have not specified whether or not drugs or alcohol were a factor.