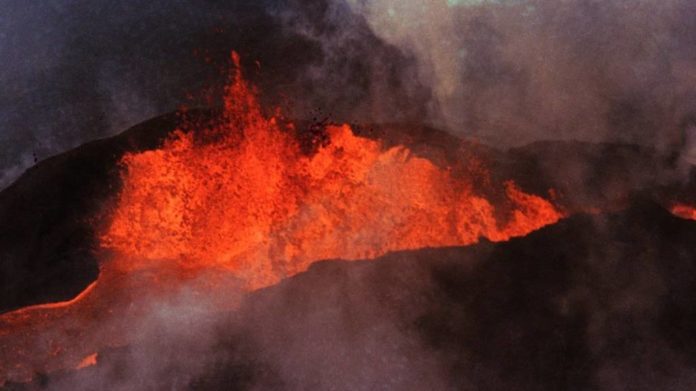 Hawaii’s Big Island is being put on alert after a series of earthquakes near the Mauna Loa volcano. The U.S. Geological Survey said Thursday that there are no signs that Mauna Loa will erupt soon, but the volcano “continues to be in a state of heightened unrest.”

Mauna Loa’s summit reservoir system is expanding, causing small earthquakes to occur beneath Mokuweoweo caldera and in a region just to the northwest of the caldera.

Eruptions typically start at the summit and migrate to the northeast or southwest rift zone or radial vents on the north flank. Mauna Loa typically erupts lava at a very high rate.

The Hawaiian Volcano Observatory said Mauna Loa has been in a state of “heightened unrest” since the middle of last month. The number of summit earthquakes has declined in recent days but could rise again.

Residents have to respond to an eruption depending on their proximity to the eruptive vent and the rate at which lava is being erupted. Authorities on the island are holding community meetings and encouraging residents to pack “go” bags in anticipation of potential lava flows.

Residents in communities closest to vents are being talked to now by Hawaii’s civil defense agency so that they have more time to react. If residents wait until the alert level is raised to “watch,” there will hardly be enough time to respond to the eruption appropriately.

More than 220 people attended a community meeting last weekend in Ocean View, a neighborhood that could be cut off from Kailua-Kona and Hilo if molten rock erupts through vents on Mauna Loa’s southwest flank.

Geologist Frank Trusdell said residents should look at the agency’s maps and pay attention if the summit turns red. They can always go home after if the lava doesn’t flow into their neighborhood.