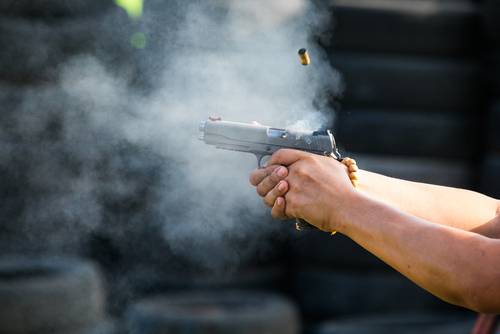 Jada Johnson, 22, was shot 17 times in front of her grandparents and two-year-old daughter after police responded to a possible break-in. Her autopsy and toxicology reports revealed that she was under the influence of methamphetamines and had been in possession of unknown pills.

After an officer-involved shooting, an autopsy confirmed her death as a homicide.

Fayetteville police arrived at the home of Johnson’s grandfather, Rick Iwanski, just before 10pm on July 1 to respond to the report of a potential break-in. His granddaughter, Jada, was experiencing a mental health crisis. When she heard the officers, Jada believed that the officers were her boyfriend and that he was trying to kill her.

At one point, Johnson took out her gun and threatened to kill herself. Police then tackled Jada Johnson and shot her multiple times in front of her grandfather, her grandmother, and her two-year-old daughter.

The Fayetteville Police Department claims that Officer Zacharius Borom and Sergeant Timothy Rugg pleaded with the young lady for over an hour to put down her weapon, but she refused. Police said Sergeant Rugg tried to disarm Johnson when she went to drink water while she held her gun under her arm. However, her grandfather claims that this depiction of the incident is not accurately portrayed.

After his granddaughter’s death, Iwanski became involved with PACT, a nonprofit organization that addresses police reform. He has asked city leaders to change police culture and develop better police guidelines for mental health responses. He hopes that by doing so, officers can be held more accountable for any potential corruption.

After the incident, Officer Borom and Sergeant Rugg were put on paid administrative leave as the investigation proceeded. Johnson’s grandfather disputes the police, saying they should have tased Johnson or bean-bagged her rather than shooting her.