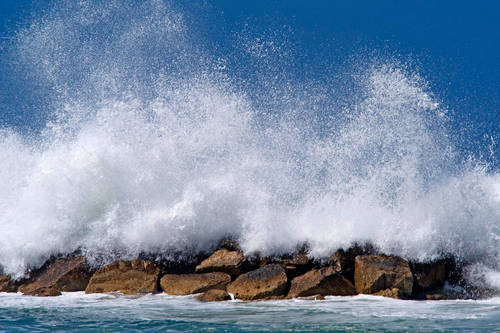 Six people were sent to a hospital with “minor injuries” after a large wave swept them off a sidewalk at South Pointe Park pier in Miami Beach on Friday morning.

A spokesperson for the city said the incident occurred around 10:45 a.m. The area is currently closed until further notice. Two men and four women were injured.

According to Berthier, there were no injuries among the lifeguards. There was a high surf advisory in effect until 8 p.m., and Miami Beach was running double-red flags citywide, meaning the ocean was closed to the public.

From Tuesday through Friday, king tides, which raise sea levels during new and full moons, were expected to affect South Florida.

Live South Beach cameras captured footage of the swell around 9 a.m., which shows powerful waves roaring behind the water.

Near the First Street lifeguard tower, hotel employees had just laid out beach lounge chairs by the tide.

Waves drenched onlookers who gathered near the coastline to capture the unusual sight. In the ocean, some surfers braved the waves.

The entrance to the pier and some parts of the nearby beach were blocked off by Miami Beach police and fire rescue officials on Friday afternoon. A handful of surfers braved the waves during the lower tides of the afternoon, with lifeguards standing watch. In most cases, however, people stayed out of the water.

This video is wild: