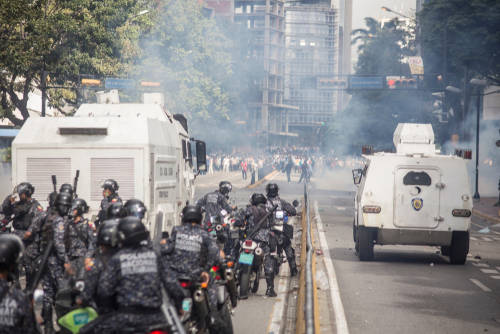 Seven Americans who were wrongfully detained in Venezuela for “years” returned to their homes on Saturday, according to President Biden.

“Today, after years of being wrongfully detained in Venezuela, we are bringing home Jorge Toledo, Tomeu Vadell, Alirio Zambrano, Jose Luis Zambrano, Jose Pereira, Matthew Heath, and Osman Khan. These individuals will soon be reunited with their families and back in the arms of their loved ones where they belong,” the President said in a statement.

For the release of these seven Americans, two Venezuelans were exchanged, both nephews of Venezuelan first lady Cilia Flores, who are imprisoned in the US.

Five of the six American oil executives known as the “CITGO 6” were arrested in Venezuela more than four years ago: Vadell, Toledo, Jose Luis Zambrano, Alirio Zambrano, and Pereira. As a result of the visit by two senior US government officials to Caracas in March, two Americans who had been detained there, including one of the CITGO 6, were released. As of September 2020, Heath, a Marine veteran, was being held for questioning. In January 2022, Khan was detained.

The US government classified all seven individuals as wrongfully detained.

Vadell, Toledo, Jose Luis Zambrano, Alirio Zambrano, Pereira, Heath, and Khan, according to a senior administration official, are in “stable health” and have been offered medical care as well as a “range of support options.”

Currently, they are flying back to the US, the official said. Upon their release, US officials met with each of the seven individuals, who will be evaluated further on Saturday.

A senior official said that Biden spoke with each family to “share the good news of their release.”.

US officials described the prisoner exchange with Venezuela as a “tough” and “painful” decision.

“During those negotiations, it became clear that there was only one acceptable outcome: free Americans. As a result of the President’s tough and painful decision, Venezuelans are getting something they actively wanted. Specifically, it became clear in the course of negotiation that the release of two Venezuelans, Efraín Antonio Campo Flores and Francisco Flores de Freitas, sometimes referred to as the ‘Narco nephews’ due to their relationship with Nicolas Maduro’s wife, was essential to securing the release of these Americans,” the official said.

A federal court in the United States convicted Flores and Campo in 2016 of conspiring to smuggle more than 800 kilograms of cocaine. As a result of the 2017 convictions, they were sentenced to 18 years in prison.

Flores and Campo were both granted clemency by Biden, according to the first official.

After the President approved the swap “a number of weeks ago,” negotiations and logistical efforts took “some time to work out,” the official said.

A country between Venezuela and the United States was chosen for the exchange of Venezuelans and Americans. As soon as the planes landed, there were both visual and virtual confirmations that the correct passengers had been boarding. The first official added that “passengers departed on different planes than the ones they were on as they landed.”

A US government delegation quietly visited Venezuela in June “to discuss the welfare and safety of US nationals in Venezuela,” a State Department spokesperson said at the time

In a statement, US Secretary of State Antony Blinken welcomed the latest development and commended State Department personnel for “their tireless efforts.”

“Although we celebrate the release of these U.S. citizens from Venezuela, we still have a lot of work to do. As Secretary of State, I am committed to the safety and security of all Americans worldwide, and we will continue to press for their release,” he said.

The Bring our Families Home Campaign welcomed the news of the detainees’ release “after a long and difficult captivity.”

“We applaud President Biden for having the courage to make this deal and encourage him and the Administration to continue building upon the momentum that begun with the release of Trevor Reed,” referring to the former Marine who was detained in Russia in 2019 and later released in a prisoner swap.